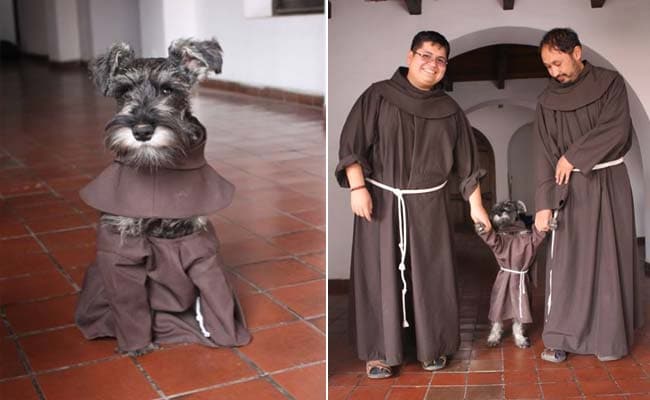 Friar Bigoton was adopted by The Franciscan monastery of Cochabamba, Bolivia

In Catholic tradition, St. Francis of Assisi is the patron saint of animals and the natural environment. It makes sense, then, that one of the latest members of his order is a dog. The Franciscan monastery of Cochabamba, Bolivia, recently adopted a stray dog, Carmelo. In no time at all, Carmelo distinguished himself as the most adorable member of the monastery. In honour of his new position as a monk, he even earned a more formal title: Friar Bigoton (literally translated to Friar Moustache).


Friar Bigoton even has a tiny Franciscan habit to wear now. How adorable is that?

"His life is all about playing and running," fellow friar Jorge Fernandez told The Dodo. "Here, all of the brothers love him very much. He is a creature of God."


Besides running and playing, Friar Bigoton also has more serious duties to attend to.


"Brother Carmelo preaching to the fish," says the caption on this delightful photograph, which was posted by Franciscan Kasper Mariusz Kapron.

Photos of the adorable dog, posted by Franciscan Kasper Mariusz Kapron on February 26, have been shared over 2,500 times. "What a beautiful Friar," says one commenter. "Photos of you 3 made my day," says another.

One version of the album, shared by Proyecto Narices Frias, has collected over 15,000 likes and 37,000 further shares. Proyecto Narices Frias is the local animal rescue group that facilitated Carmelo's adoption. It hopes that other monasteries are inspired by this story to adopt strays too.
You can check out the whole album below:


What do you think of Friar Bigoton? Let us know using the comments section below.
Comments
Friar Moustache