"It was amazing to see them again, I missed the girls terribly." 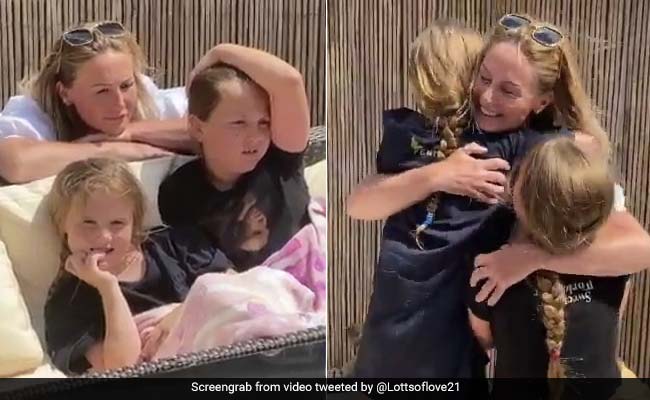 A healthcare worker surprised her daughters after nine weeks apart.

A healthcare worker has been reunited with her daughters after nine weeks apart during the pandemic. Suzie Vaughan is a medic from the UK who spent nine weeks isolating away from her family as she worked on the frontline of the coronavirus crisis. The 43-year-old was filmed surprising her ecstatic daughters upon her return in a reunion video that has left many teary-eyed.

The Norfolk resident was recorded sneaking up behind her daughters Hettie, seven, and Bella, nine, after spending more than two months away from them. According to ITV News, the girls had been staying with her sister Charlotte, who shared the video of the surprise reunion on Twitter.

The video has gone viral on Twitter, collecting more than 1.7 million views and hundreds of touched comments since being posted a day ago.

"I welled up," wrote one person in the comments section, while another said, "A stronger woman than me. I wouldn't be able to function never mind save lives after nine weeks away from my kids," another wrote.

"We had said it was only going to be for a maximum of a month, but nobody knew at the beginning of this how it was going to go," said Ms Vaughan, according to Ardrossan & Saltcoats Herald.

"It was amazing to see them again, I missed the girls terribly."

Working as an operating department practitioner in an intensive care unit, Ms Vaughan had even spent her birthday away from her daughters. "It was a hard decision to make. I just had to think to myself it was to keep them safe and I was so worried in case I was bringing something back," she said.

The family plans to spend the week catching up with each other before the girls return to school on Monday as UK eases lockdown restrictions.

Yesterday, a mother isolating away from her 17-month-old daughter after testing positive for COVID-19 had opened up about the struggle in a 'Humans of Bombay' post.