Man Secretly 'Proposed' To Girlfriend For Over A Month. She Had No Clue

"Some plan a flash mob, a fancy meal, or even arrange a marry me sign. I couldn't do this..." 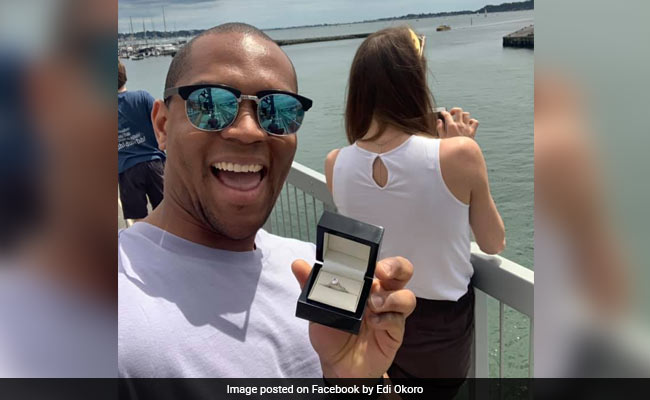 Edi Okoro proposed to his girlfiend for over a month - and she had no idea.

A man secretly 'proposed' to his girlfriend nearly every day for over a month before finally popping the question. Edi Okoro, from Hertfordshire, UK, took a series of photographs that show him with an engagement ring. In the background these is his girlfriend, Cally Read, completely unaware that her partner is proposing.

"Some plan a flash mob, a fancy meal, or even arrange a marry me sign," Mr Okoro wrote while sharing the pictures on Facebook, where they have gone massively viral. "I couldn't do this because "Edi doesn't plan" .... I'm a spontaneous improviser!"

He added in his post that for some time, he took the ring with him everywhere, hoping that the right moment would arrive. After a month of waiting, he decided to start documenting the "missed opportunities" where he could have proposed.

"After a month or so of waiting for the right moment, I was sitting on the sofa admiring "my precious" (yes I became very attached to this ring by this point) Cally almost caught me staring at the ring, and it hit me!....All these missed opportunities mixed in with the thought - Cally doesn't know I have the ring!! I should just start documenting these moments!" Mr Okoro wrote on Facebook.

So the 30-year-old began to take pictures and videos of his girlfriend with the ring next to her - at the beach, in the grocery store, while she brushed her teeth and as she slept.

The hilarious pictures, posted on Facebook last Monday, have collected over 65,000 'shares' and more than 90,000 reactions. Take a look at the delightful post below:

"What a great funny story!" wrote one person in the comments section. "So thoughtful and funny," said another.

On Wednesday, Mr Okoro shared a picture with his girlfriend (now-fiance) wearing the engagement ring.

He has yet to reveal how he finally proposed.

This is not the only story of a long-con proposal to have won hearts. In April, a Tokyo man's larger-than-life proposal that required six months of travelling had gone viral online.