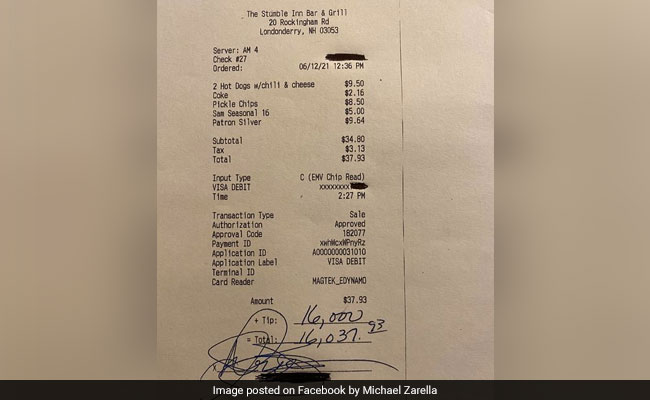 Restaurant owner MichaelZarella shared an image of the bill on Facebook.

The COVID-19 pandemic has affected economies across the world. One of the worst-hit sectors has been the hospitality industry, with several countries imposing a lockdown to prevent the spread of the virus, thereby bringing restaurant footfalls to an abysmal low. So, when a diner at a New Hampshire restaurant chose to pay a tip of $16,000 recently, the Internet, too, was generous with praise. The incident came to the fore when the owner of the restaurant, Stumble Inn Bar & Grill in Londonderry, New Hampshire, share a photo of the bill on Facebook this Monday.

In the post, restaurant owner Michael Zarella thanked the anonymous diner for his generosity. Sharing the image, Mr Zarella wrote, "Stumble inn had a very generous customer. We thank you for your generosity." The receipt shows the diner left a tip of $16,000 - which is over Rs 11 lakh.

Mr Zarella said that the man seemed like a regular diner until he paid the bill. Speaking to TODAY, he recounted the incidents from the day. He said, “A gentlemen came in at the bar and ordered a beer and a couple of chilli cheese dogs, and then he ordered pickle chips and a Patron (tequila) drink. At around 3:30, he asked the bartender … for the check. She gave it to him and walked away, and then he said to her, ‘Don't spend it all in one place'.”

Though the bartender did not look at the bill right away, the comment to not spend it all in one place piqued her curiosity. Upon seeing the amount, she asked the man if he was “kidding” and that it was “crazy”. To this, the man said that he had “wanted them to have it”.

So, what happened with the tip? According to Mr Zarella, the money will be split between the eight bartenders, who also double as the servers at the outlet. A portion of the money will also be shared with kitchen workers.

Reacting to Mr Zarella's post on Facebook, several users praised the anonymous diner for his act of kindness. One user said, “This is proof that decent people are out there. In this case, far exceeding simple decency, and truly stepping up to help his community. So much respect. Amazing!”

Tell us what you think of this incident.