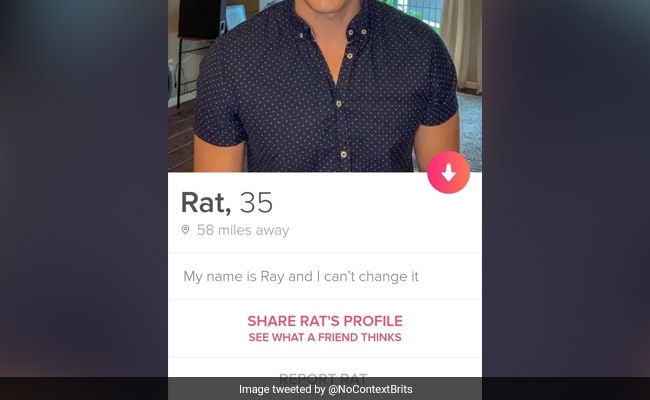 We are in the era of online dating and an impressive bio gets you a swipe right. Dating profiles are at times funny, witty and sometimes just bizarre. Recently, a man misspelt his name while creating his Tinder profile and he was not able to rectify it. Well, eagle-eyed trollers didn't miss the opportunity to start a meme fest.

The 35-year-old man couldn't find the option to change the name and on his dating profile, the man wrote a small caption, "My name is Ray and I can't change it."

The screenshot was posted on Twitter by user No Context Brits and it shows a tinder profile of a man named Rat. Although, his tinder bio reveals his real name. The man clearly had made a typo and since he couldn't make changes to it, he decided to clarify it in his bio.

As soon as the picture was shared on social media, it went viral for obvious reasons and triggered a meme fest. The post has amassed 37,600 likes over 1600 retweets and several comments. Many users made fun of man's lack of technological knowledge A user wrote, "They say you're never more than 58 miles away from a Ray." Another comment read, "If he's a chef, I would need to know if he prefers to go by Ratatouille or Raekwon."

"This made me laugh way too hard," a third user wrote. The fourth wrote, "No cats allowed."

Tinder recently shared a meme on love life. The dating application had shared a hilarious picture that triggered a full-fledged meme fest on Twitter.

The meme featured an ice cream tub with a person about to take its lid off. “When you start talking to them,” the text above the picture read. Next to it, is another picture where the person takes the lid off to reveal green chillies, ginger, and lemon inside the tub instead of some delicious ice cream. “But they keep talking about their ex,” the text above it read.