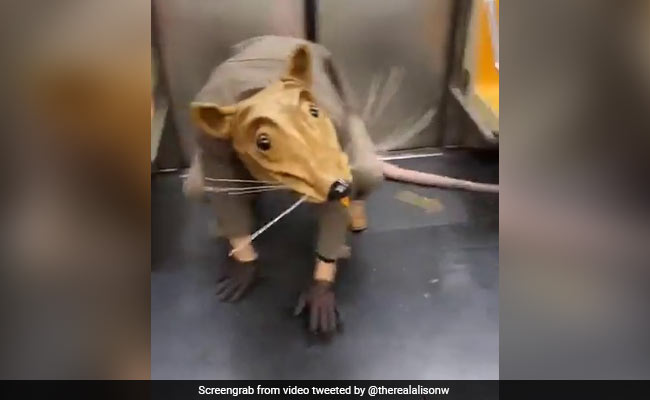 New York - the city that never sleeps, the city of lights, of the Empire State Building... and rats. Rats in New York City are widespread, and residents have complained repeatedly about rodents taking over their city. Rats are regularly spotted on the roads and scampering in and out of subway tracks, but even seasoned New Yorkers would do a double take at the sight of this gigantic rodent.

"Buddy the Rat" - aka performance artist Jonothon Lyons - has been filmed multiple times riding the subway in New York City of late, reports the New York Post. Jonothon, who works in physical theater and puppetry, created the character of Buddy about 11 years ago. These days, he dons the costume of the rat with a huge pink tail and a face-covering mask to startle passengers on New York City trains.

One video of Buddy the rat that has gone viral online shows him boarding the subway on all fours. The video was originally uploaded to TikTok and re-posted on Twitter by comedy writer Alison Williams.

Since being posted on the microblogging platform, the video has been viewed over 4.4 million times. It has collected hundreds of amused comments.

Also going viral is another video of Jonothon - one that shows him recreating the famous 'pizza rat' video of 2015. In the hilarious clip, he drags a super-sized pizza slice up the stairs.

New York subway stations are no stranger to rats. For years now, residents have been complaining about their presence. In 2015, New York City Comptroller Scott Stringer told Reuters: "The rats are taking over. I'm a lifelong New Yorker and I've never seen it this bad. I see them on my way home, they're standing upright, they say, 'Good morning, Mr. Comptroller.'"