Read inOther Languages
This Article is From Sep 11, 2020

Man Gets Beaten Up By Angry Swan While Rescuing Swanling

"Swans are very protective parents. The male swan, called the 'cob', can be very aggressive in order to protect his young," Wildlife Aid said. 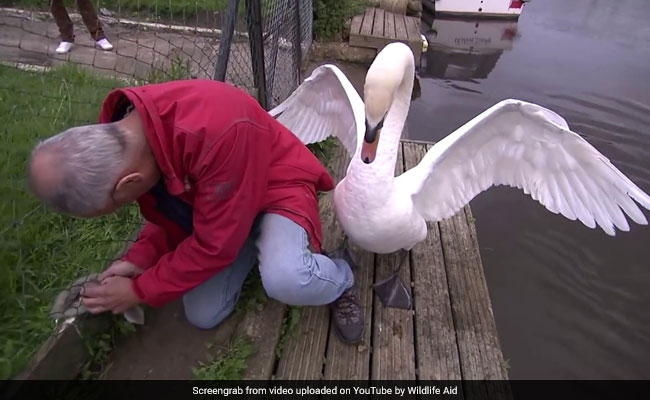 A man rescues a baby swan stuck in a wire fence.

A video that has resurfaced on the Internet and gone viral all over again shows a wildlife rescuer putting up with an angry father swan - all to rescue his cygnet. The rescue took place in the UK in 2014, when Simon of Wildlife Aid responded to reports of a baby swan stuck in a wire fence.

"Swans are very protective parents. The male swan, called the 'cob', can be very aggressive in order to protect his young," Wildlife Aid, a UK-based wildlife rescue organisation, wrote on YouTube at the time. "Earlier this year, Simon went out to rescue a cygnet that was stuck in a fence, near the River Thames. He had to face a very angry cob that wouldn't let anybody near his poor baby," the organisation added, sharing a video titled "Cygnet rescue - Simon beaten up by an angry swan."

The video shared by the animal welfare organisation has now resurfaced on Twitter six years later. It shows the angry father swan flapping his wings furiously at the rescuer who, remarkably enough, kept his cool and continued working until the baby swan was rescued.

Man saves a baby swan while it's mom is being a mama..

Since being shared on the popular Twitter account "Buitengebieden" on Thursday, the rescue op has been viewed over 7.8 lakh times.

"Man reprimanding a swan for being silly may be the most British thing I've seen," wrote one person in the comments section.

"I bet that little swan got a big lecture from momma after that!!" another remarked.