Man Falls Into Lake Right Before Proposing To Girlfriend. Video Is Viral

"He fell so hard he popped up with a ring!" wrote his girlfriend. 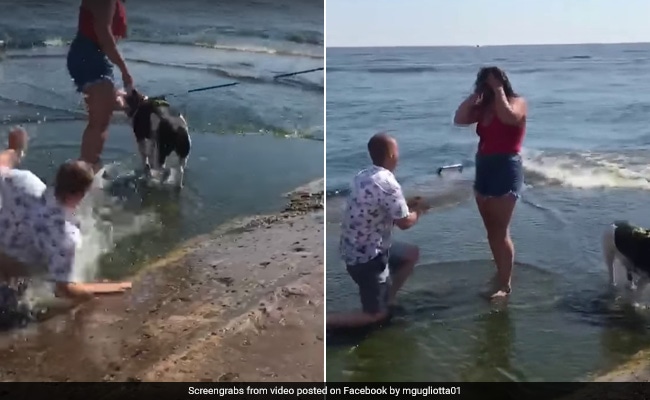 Logan Jackson tripped and fell into water right before proposing to his partner.

This man gave a whole new meaning to the phrase "falling for you". A video that is going viral online shows a Michigan man slipping and falling into a lake right before popping the question to his girlfriend. According to Daily Star, Logan Jackson took his partner, Maria Gugliotta, to Lake Michigan in Grand Haven, hoping for a beautiful proposal.

The scene, however, quickly turned from romantic to comic when Mr Jackson tripped and fell into the water.

A clip of the incident, shared by Maria Gugliotta on Facebook, shows Mr Jackson walking towards her with a ring concealed in his pocket. But as he walked down the slope of the water, he appeared to step on some seaweed, which led to him slipping and falling straight into the water. Luckily, he managed to turn the hilarious moment around.

Undeterred by the tiny obstacle, he brushed himself off and quickly got down on one knee to propose to his girlfriend - who accepted happily.

"He fell so hard he popped up with a ring!" Maria Gugliotta wrote on Facebook while sharing the video last Saturday. "I'm so excited but first I have to stop laughing."

The video has collected thousands of views and amused reactions since being posted online.

"Most memorable proposal," wrote one person in the comments section, while another said: "This is amazing."

According to Ladbible, along being popular with the couple's family and friends on Facebook, the video has also garnered thousands of views after being shared by other pages, including Barstool Sports.

At 2, She Moved From India To USA And Always "Felt American" - Until It Was Time For College