Man Driving Banana Car Pulled Over. Then Cop Did Something Unexpected

The trooper took Steve Braithwaite's license and walked away. When he returned, he handed the license back - but something was different. 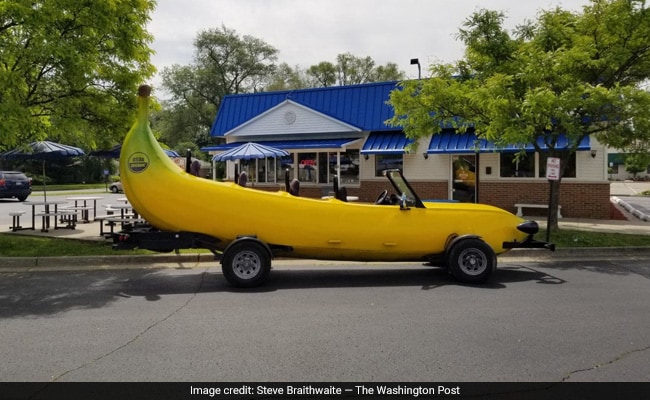 Steve Braithwaite built a banana car "to do something completely different and ridiculous."

Steve Braithwaite spotted the flashing blue-and-red police lights - and promptly pulled his banana off the road.

Braithwaite, 59, has spent the past two years driving his homemade, banana-shaped convertible across America, offering pay-what-you-can rides to fund his days and sleeping nights on strangers' couches or in cheap motels. He's become quite familiar with the police: Officers often pull him over, friendly but curious, and ask what on earth he's doing.

So when he saw the state trooper ease onto the road behind him as he was driving down U.S. 223 near Adrian, Michigan, on Oct. 27, Braithwaite thought he knew what was coming.

Braithwaite also explained his banana road trip, which he calls "The World Needs More Whimsy Grand Tour." The trooper took Braithwaite's license and walked away. When he returned, he handed the license back - but something was different. 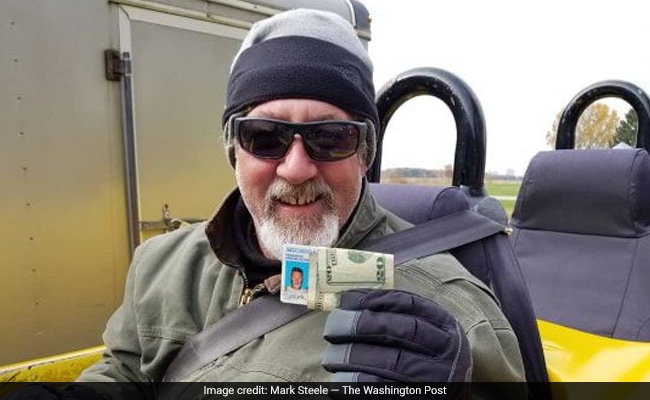 The trooper peeled out, and Braithwaite split, too - but he couldn't stop thinking about the crumpled $20. He couldn't wait to spread the word about the unexpected fruit of his most recent encounter with law enforcement.

Braithwaite didn't get the trooper's name, but Michigan State Police posted on Facebook Friday morning that the trooper, Bill Strouse, was just a few months away from retirement when he came across Braithwaite in the colossal banana.

"As a trooper, you never quite know what you're going to see each day," the post said,

When Braithwaite got to his destination after being pulled over that day, he posted on the "Big Banana Car" Facebook page about it - and things ripened rapidly. The post garnered hundreds of likes, shares and comments, eventually earning write-ups in local newspapers.

"It's all been quite amazing," Braithwaite said, adding that he'd like to give the trooper a free ride sometime.

Still, news coverage isn't exactly new for Braithwaite. Since he completed the banana car in 2011, it has been featured on "Good Morning America" three times and drawn the attention of celebrities such as Heidi Klum, Simon Cowell and T-Pain. It also holds the Guinness World Record for "longest custom banana car."

Braithwaite, who moved to the United States in 1986 from his native England to follow a woman, said he built the ride because he wanted "to do something completely different and ridiculous." He was living in Linden, Michigan, and selling home address signs: "It paid the bills, but it was kind of boring."

Eager to break the monotony, Braithwaite recruited a few friends, bought a Ford F-150, and set to work crafting "the world's only motorized banana." Working almost exclusively on Sundays, he got the job done in about 2 1/2 years at a cost of roughly $25,000.

"I wanted to build something that no one had ever seen before, [but] it was a two-part plan," Braithwaite said. "Plan A was build it. Plan B is drive it around the world."

After a brief stint building custom-designed, unusual vehicles, Braithwaite hit the highway in early 2018 and has been zooming across America ever since. He's working on visiting all 50 states and still hopes to eventually cross the globe in his banana.

Meanwhile, he's developed an effective strategy of chronicling his travels on Facebook, posting about where he's been and where he's heading next. The updates usually spur sufficient interest from customers and from people eager to offer a guest room bed or an empty couch to keep Braithwaite fed, rested and on the road.

There's no "rhyme or reason" to his work schedule, Braithwaite said. He typically spends at least a few days each week taking people on rides. He posts his location on social media, pulls into an obliging parking lot and prays that people will show up. There's almost always a line awaiting him, he said - longer in the summer months, shorter in the winter.

Braithwaite doesn't total up his rides but estimates he's given "thousands and thousands." The trips typically last five to eight minutes, and voluntary payments vary wildly.

"One gentleman and his two children gave me a bunch of coins that might have totaled 70 cents," Braithwaite said. "And then the very next rider took his two kids and gave me three twenty-dollar bills!"

Apart from adapting to the ever-changing pay scale, Braithwaite has adjusted to other quirks involved in living-by-banana-car, including his vehicle's lack of a roof. He spends winters in the western or southern parts of the country - and when he can't avoid the cold, he bundles up.

He's come to accept rain showers: "If I carry on driving, 50 miles down the road I dry out again." He does whip out an umbrella at stop signs and traffic lights, but it turns inside out, useless, at any pace faster than 20 mph.

No discomfort, he said, can tarnish the joy he receives from driving kids - who are most of his customers. Children get really excited when they see the vehicle, according to Braithwaite, breaking into big smiles and jostling one another in anticipation.

"When I'm driving sometimes, all I can hear behind me are children's giggles and their absolute delight," he said. "And that is so nice - I can't even tell you."

He's thought a lot about what to do with the Michigan officer's $20. He wants to donate it to a kid in need; he's just looking for the right cause.

"I'll say 'This is with the best wishes of a Michigan state trooper,' " Braithwaite said.

It would be a moment of gravity in an otherwise fanciful existence. He said the entire banana experience proves the worth of his guiding maxim: "In life, you should do something ridiculous - and be proud of it."