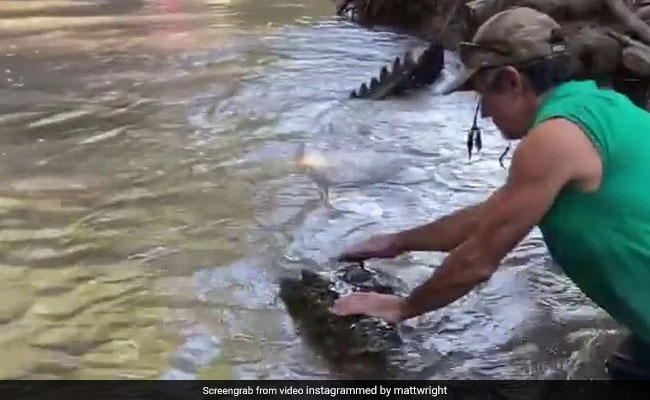 "Go away" or "stay" are commands that you may affectionately issue to your dog - or your 13-foot crocodile. Australia's outback wrangler Matt Wright, who stars in a television show of the same name, has divided opinions on social media with a video that shows him gently pushing away a persistent crocodile in water.

According to The Guardian, Mr Wright was trying to clear logs from a river path in Australia's Northern Territory when the crocodile approached him. While the sight of a crocodile stalking someone in water, jaws wide open, is enough to send most people running for their lives, not Matt Wright. He was filmed trying to swat the crocodile away playfully.

In an Instagram video he shared three days ago, which has since gone viral, Mr Wright can be seen asking the crocodile called "Bonecruncher" to "sit", "go away" and "stay." He also continues to chat to the camera while calmly pushing the huge animal away by its snout.

The hazards of working in northern Australia, Tommy's at it again ???????? @australia @bisleyworkwear @topendsafaricamp #wildlife @sandpalmsatbynoe

Since being shared three days ago, the video has garnered over 1.8 lakh views and nearly 700 amazed comments.

"This is the most Austrialian thing I've watched," remarked one Instagram user.

Some, however, criticised the stunt as potentially dangerous. "Can't wait until tourists see this and think crocs are big puppies," one person wrote.

Speaking to ABC News Breakfast, Mr Wright said he had known Bonecruncher for "many years" and that the crocodile was "placid".

"It's a great relationship we've built with Bonecruncher, but I do not want to set an example where people think they can get befriend a crocodile. This is something special," he said, warning others not to follow his example and get close to crocodiles.