The snake was reportedly eight-foot-long 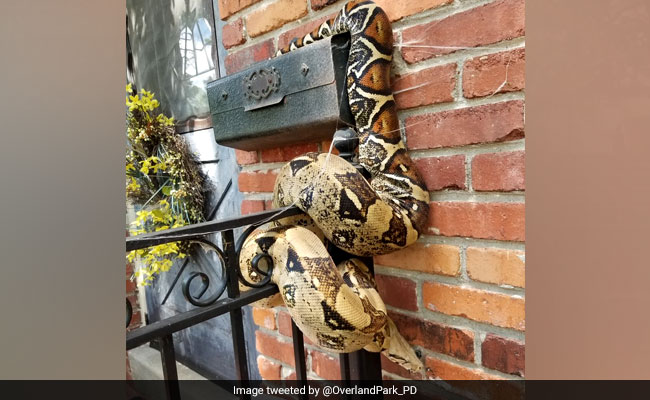 The snake had likely escaped from a house close by.

A mailman in Kansas, US, out doing his job, found a huge surprise waiting for him - a gigantic snake wrapped around a mailbox.  A tweet posted by Overland Park Police shows pictures of the huge reptile and, we warn you, they aren't for the fainthearted.

While the tweet says the snake is a Ball Python, Overland Park police later clarified that it was a boa constrictor. "The poor resident did not receive their mail today (obviously)," says the tweet. The snake was reportedly eight-foot-long.

Pictures show the snake lounging comfortably on the mailbox and the fence next to it. Another picture shows Animal Control Officers working in tandem to carefully remove the snake from its place.

A Ball Python was found my a mailman and called Animal Control. The poor resident did not receive their mail today (obviously). The @OPPD_PIO is trying to talk the Animal Control Officers to put the snake under the @OPPD_Chief desk, but they won't. pic.twitter.com/YqahoO2pVn

A police spokesman, Officer John Lacy, told The Kansas City Star that the snake had likely escaped from a house close by. They hope its owner would call about of the missing snake soon.

Several people have posted comments on the post about the snake.

"Has to be someone's pet. It either escaped or they just ignorantly let it go," says one Twitter user. "Whole lot of 'nope!'," says another.

Many others used GIFs to show their reactions:

Can we get an exact location (or cross streets) so we can avoid this location at all cost!? pic.twitter.com/yVdQdW0rQM

I'd be calling a realtor and Two Men and a Truck stat. pic.twitter.com/OokuoWqq3d

How would you react if you spotted a snake like this? Tell us using the comments section.