Maharashtra Man Ties Ola Scooter To Donkey, Parades It Around Town. Here's Why 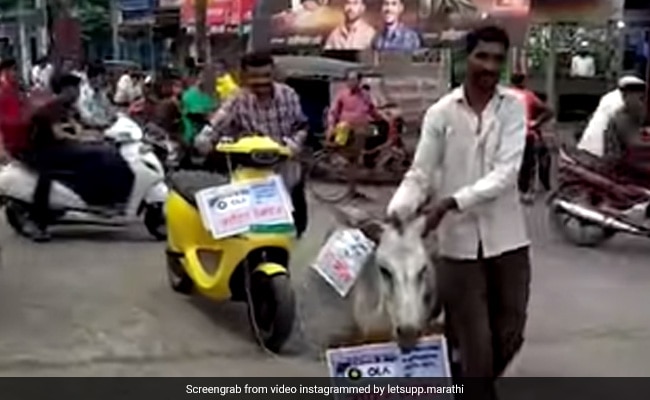 After receiving no satisfactory response from Ola when his electric scooter shut down just a few days after he bought it, a man from Maharashtra held a one-of-its-kind protest. Sachin Gitte, from Beed district, tied a donkey to the two-wheeler and paraded it around town with posters and banners urging people not to trust the company.

A clip shared on Instagram by a local news channel LetsUpp Marathi shows the donkey pulling the two-wheeler.

The two-wheeler stopped working barely six days after Mr Gitte bought it, according to a report in ABP News. After he contacted the company, an Ola mechanic checked his scooter. However, nobody came to fix it, states the report. Mr Gitte also made many calls to the customer service but it only resulted in ambiguous responses instead of a specific remedy.

As a result, he tied his two-wheeler to a donkey and paraded it on Sunday with banners that stated, “Beware of this fraudulent company, Ola”, and “Do not buy two-wheelers of Ola Company”.

The protest caused a stir in Parli and has since gone viral on the internet.

Mr Gitte, a trader, has reportedly even approached the Consumer Forum and complained that the bike has not been repaired or replaced. He even suggested that the government investigate Ola and take appropriate action, as he alleged there is no financial protection for consumers from the company.

Following reports of vehicles catching fire, Ola Electric announced a recall of 1,441 units of its electric two-wheelers on April 24. These scooters will be evaluated by the company's service engineers and will undergo full diagnostics across all battery systems, thermal systems, and safety systems, according to the company.