Viral: This Pilot Rescued A Baby Chimp And Everyone Swooned

The video drew as much attention for its bearded pilot, dubbed #HotPilot by Twitterati, as it did for the adorable chimp. 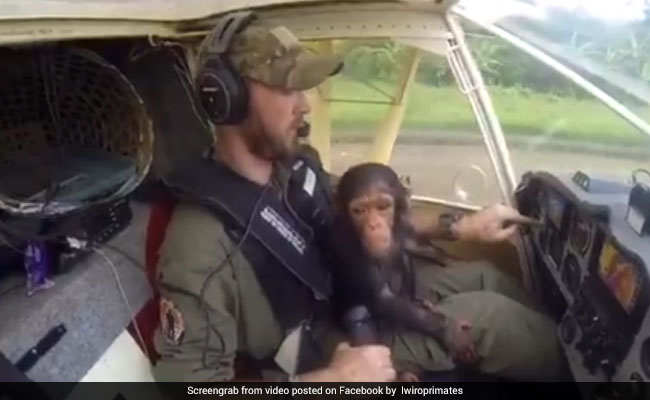 The viral video shows Mussa, a baby chimpanzee, being transported in a small plane after being rescued

Lwiro Primates, a rehabilitation center and sanctuary for nearly 200 orphaned chimpanzees and monkeys in Congo, shared a heart-melting video of a baby chimp rescue on Wednesday. In it, tiny Mussa sits in the lap of a pilot who is flying the animal from Virunga National Park to safety with Lwiro.

"Unfortunately his family is dead," Lwiro wrote in a comment on Facebook. "We do not know how many, maybe only the mum, but most likely several members of his family were killed."

But the video drew as much attention for its bearded pilot as it did for the adorable chimp. It was partly the man's gentle manner: He calms Mussa with a quiet "shh," nuzzles and grooms the chimp and supervises as the baby touches a knob on the aircraft's instrument panel. It was also, as one Twitter user put it, because the pilot is "low-key hot."

The real name of #hotpilot, as Twitter users quickly dubbed him, is Anthony Caere, and this wasn't his first animal rescue. According to a blog post on Virunga's website, Caere is a Belgian who heads the park's four-plane Air Wing and serves as a " 'big brother' in the sky" for its rangers. Caere's duties include supporting rangers' anti-poaching patrols, doing surveillance for wildlife censuses, inspecting poaching sites and carrying out medical evacuations. Before this latest brush with the limelight, he appeared in a Belgian documentary program called "Flying Doctors," which followed three physicians who aided rangers in Virunga. (He also survived a major crash last year.)

Caere's Instagram is full of inspiring, stunning images and videos of the park's landscape and wildlife, as well as a few of the pilot himself with rangers and other rescued primates.

But Caere also offers sobering words about the mountain gorillas, elephants and other animals that are under regular threat from poachers. "This looks cute but is actually a sad story," he wrote Wednesday in a caption for the video with Mussa. "He should be with his mum."

Lwiro, which rescues animals from poaching and the pet trade, said on Facebook that this was its third chimpanzee rescue of the year. Its website says the organization cares for 72 chimps and 92 monkeys of 11 species. It did not provide additional details about Mussa's situation, and neither Lwiro nor Caere responded to requests for interviews on Thursday.

Caere may well have been too busy saving more lives. The park's blog post said he flies out early most mornings and doesn't return until the end of the day. "And as soon as he's got his feet back on the ground, people gather around him to hear news about the park," the post said.

The pilot now has plenty of new fans eager to know more about his work - and, well, about him.

Caere's social media accounts make clear that his passion for wildlife and wild spaces is real. On Jan. 6, he posted a video in which he wished his followers a happy new year - and made a request.

Promoted
Listen to the latest songs, only on JioSaavn.com
"One of the little things I wish for this year is that we all do only that little extra effort for our beautiful, endangered planet, its nature and its animals," he said. "If our kids still want to see wild animals here in 20 years, well, then, we need to act now. Don't give up on our beautiful planet."