Love During Lockdown: How Coronavirus Has Changed Dating

In the new normal created by the virus crisis, video dating is fast becoming the norm. 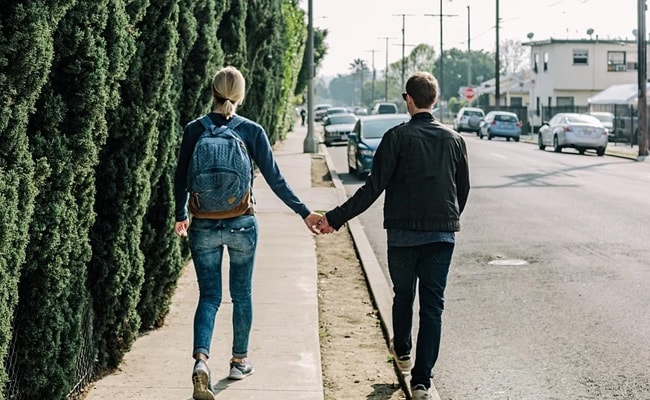 Coronavirus lockdown: How the virus has changed dating in US.

How do you find love when you're stuck at home? The coronavirus pandemic has made that challenging, to say the least. But millions of single Americans are finding ways.

Some have attempted socially distanced outings, others have turned to steamy video chats, while still others have tried international online dating as people adapt the art of seduction to the virus era -- and dating apps are finding ways to adjust.

In normal times, Kate Earle, a 30-year-old teacher in Washington, finds it fairly easy to connect in person with men she finds attractive at first glance on Tinder.

"But because that's not an option, the conversations are going on much longer," she said.

Earle said those conversations also seem to veer more often toward "online sexual interaction," but she added that she has never considered breaking lockdown rules for an in-person date.

"I think everybody is a little bit sexually frustrated, and I am as well," she said.

"And there's definitely been temptation to meet up with somebody... but I think it's not so much that I would actually do it."

The Great Lockdown has driven single people around the world to online dating apps in record numbers.

Tinder saw an all-time high in usage on March 29, with more than three billion "swipes," and the number of messages exchanged on rival app Bumble increased 26 percent over a two-week period in March in the United States.

The lockdown order came at the worst possible time for Beatrice, who was newly separated from her husband and living in the US capital.

A 30-something Frenchwoman, she registered with several online dating apps in mid-March.

Since then, she has found herself bending some of the confinement rules to improvise outings with her new acquaintances.

"I was a bit nervous," she told AFP. "It's hard walking with a mask on your face when you're meeting someone for the first time. So you end up taking off the mask after five minutes."

After a few disappointing outings during which she observed physical separation rules, she met someone she liked -- "and we ended up not respecting social distancing," she admitted.

In the new normal created by the virus crisis, video dating is fast becoming the norm. While Tinder lacks this option, both Hinge and Bumble offer virtual dating.

Zach Schleien launched his Filter Off app for video speed-dating just before the pandemic struck, and at first only a few thousand users signed up. But that changed quickly.

"It's like a 7,000 percent increase in less than a month," said the 29-year-old New Yorker, who believes online dating is the best way to assess possible romantic interest before meeting in person. "It's been nuts."

So, can a romantic candlelight dinner with a stranger -- on a laptop screen -- really work?

Dating coach Bela Gandhi cited the example of one client, a woman in her 60s, "who has fallen in love with somebody in the last six weeks, and they've only met via Skype."

"And then it's just the cherry on top of the sundae once you meet in person."

But Alexandra Solomon, a clinical psychologist on the faculty of Northwestern University outside Chicago, doesn't see it quite that way.

"Thank goodness we have video dating for now," she said, but added: "When we come out of this, I really want people to go back to meeting across the table over a glass of wine or a cup of tea and having that old-fashioned organic experience of each other."

Meanwhile, for those interested in exploring possible matches abroad, Tinder is keeping its Passport feature free until Monday.

After that, "matches will remain, so no one has to say goodbye to anyone new they've met," said a Tinder spokesman.

Bhangra On The Streets Of Britain Impresses Diljit Dosanjh. Watch