London Job Seeker Stood At Tube Station With Placard. Interview In 3 Hours And Then....

"For the first three days my phone was non-stop ringing, it never stopped ringing and LinkedIn was really busy," said Haider Malik 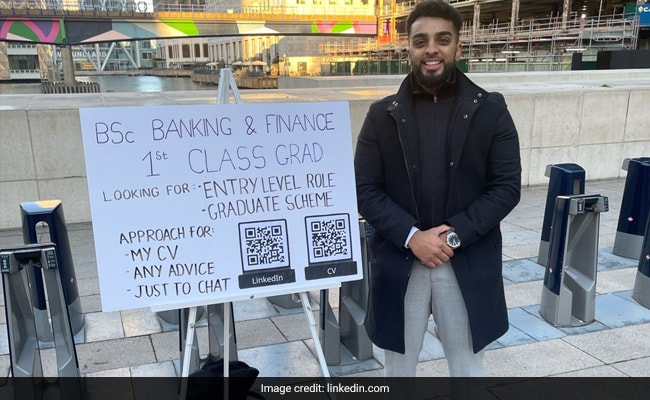 Haider Malik stood outside a tube station with his CVs, looking for a job.

A 24-year-old man from London managed to find a job within days after setting up his own pop-up stand at a train station. Haider Malik had been unsuccessfully looking for a job since the beginning of the pandemic, despite holding a first-class degree in banking and finance from Middlesex University, reports The Mirror.

After becoming increasingly frustrated with Zoom interviews that would not allow him to properly showcase his personality, Mr Malik headed to the busy financial district of Canary Wharf on the morning of November 2.

Mr Malik says he was inspired by his father Mehmood Malik, a retired cab driver who migrated to Britain from Pakistan as a teenager. The job-seeker took a change and bought a board from a stationery shop, on which he stuck QR codes so people could access his CV and LinkedIn profile easily.

????Inspired by his father Mehmood Malik, a retired cab driver who migrated from Pakistan as a teenager, he took a chance and bought a board from a stationery shop in Romford.

????Malik stuck QR codes to it so people could easily view his CV and LinkedIn profile. pic.twitter.com/U9M4GnXIGd

"The first five minutes or 10 minutes I felt nervous because I was standing there empty handed," he told MyLondon.

"I had all my CVs in my bag. I was standing there empty handed trying to look at people and hoping to meet people rather than being proactive and speaking to them."

Trying to be more proactive in his approach, Haider Malik started talking to people and soon noticed a change as passersby began to engage with him.

He said: "I held my CV in my hand and I was just saying good morning to people, just trying to engage people in a conversation.

"A lot of people gave me their cards, they gave me their phone numbers, and started talking to me," said Mr Malik, but the breakthrough came when a man named Emmanuel posted his photo on LinkedIn, which soon went viral.

Haider Malik had arrived at the station before 7 am. At 9.30am, he received a message asking him to come to an interview for a role as a Treasury Analyst at the Canary Wharf Group.

"I got a text message from the director of the department at about 9.30am saying 'come in for an interview at 10.30am'," he said.

"I had my car in the car park so I took the board and took all my stuff. I was like 'wow, this is crazy'."

After the interview, the 24-year-old went back to his car and realised the LinkedIn post was blowing up. "For the first three days my phone was non-stop ringing, it never stopped ringing and LinkedIn was really busy," he said.

On Friday, Mr Malik was called for a second interview with the Canary Wharf Group. He was offered a job the same evening. "Thank you to everyone that helped make this possible," a grateful Mr Malik wrote on LinkedIn, adding a special thanks for Emmanuel, whose post helped him find a job.