"Holy smokes! We always knew T-Rex had a bad temper but today he blew his top," the owners of the Royal Gorge Dinosaur Experience said in a statement. "There was an unfortunate (and rare) electrical issue with our mighty T-Rex and he is no longer. You might even say . . . extinct." 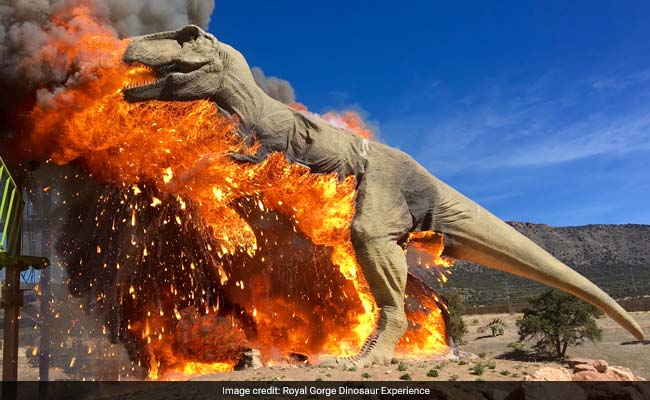 Sixty-six million years ago, Earth's dinosaurs were suddenly wiped out in a cataclysmic blast of fire and smoke. On Thursday, a similar fate befell a life-size animatronic Tyrannosaurus rex at a dinosaur-themed park in central Colorado, only this extinction was captured on video.

The 24-foot-tall reptile replica at the Royal Gorge Dinosaur Experience was set ablaze by an electrical malfunction in the early afternoon, the park's owners said in a Facebook post. After smoldering for about 10 minutes, huge flames engulfed the creature, whose motorized head and jaws sway as parkgoers pass by.

No one was injured in the fire, which also burned a nearby obstacle course, according to park owners Zach and Carman Reynolds, who responded to the incident with some entirely appropriate dad jokes.

"Holy smokes! We always knew T-Rex had a bad temper but today he blew his top," they said in a statement. "There was an unfortunate (and rare) electrical issue with our mighty T-Rex and he is no longer. You might even say . . . extinct."

The park posted video of the fire roaring against the backdrop of mountains and a bright blue sky.

The fire broke out during the park's busy spring break rush. When it finally extinguished, the T. rex's metal skeleton was still standing silhouetted in the afternoon light, its poorly-evolved, disproportionately-small arms bent plaintively toward the sky.

The Royal Gorge Dinosaur Experience opened in 2016 and sits along a picturesque stretch of highway just outside Canon City, Colorado. The T. rex was one of more than a dozen animatronic dinosaurs found throughout the park's "Dinosaur Wild Walk" exhibit. The Triceratops, Brachiosaurus and others didn't get singed.

Zach Reynolds told the Associated Press that the blaze was a total loss but "it made for some spectacular imagery along the way." He said he was in touch with the manufacturer about getting a new T. rex before summer. The park will bring a new stegosaurus fossil cast to its museum around the same time, the Daily Record reported.

Promoted
Listen to the latest songs, only on JioSaavn.com
"We are incredibly proud of our team for the way they efficiently and quickly handled this situation and kept our guests safe. All in all we are a little shaken but we are operating business as mostly usual," the owners said. "Safety of our guests and staff is of the utmost importance and we assure everyone that we are perfectly safe."