Karnataka election results show BJP fall short of 112 majority mark despite being the single largest party. In its attempt to form government, Congress agreed to back a JDS-led coalition with HD Kumaraswamy as chief minister 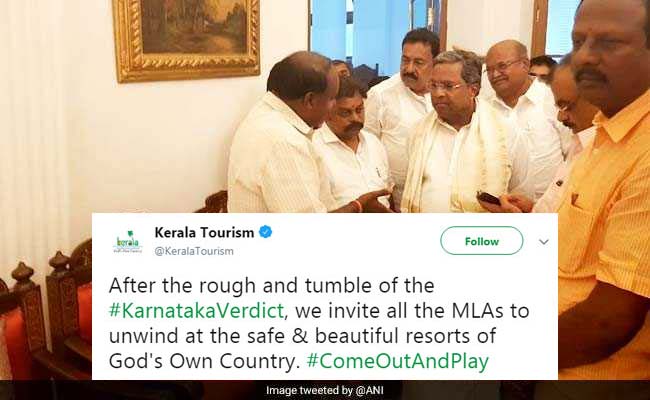 New Delhi: Karnataka witnessed a dramatic contest between the Congress and the BJP as votes cast in elections on Saturday were counted this morning. With no party reaching the magic mark of 112 - not even the BJP, which is the single largest party - to form government, the next few days are set to be busy and chaotic. A light-hearted dig from neighbouring Kerala referring to the "rough and tumble" of the Karnataka verdict amused many on Twitter. A tweet by Kerala tourism, which has now been deleted, invited Karnataka's newly-elected lawmakers to the "safe and beautiful" resorts of God's Own Country. "After the rough and tumble of the #KarnatakaVerdict, we invite all the MLAs to unwind at the safe & beautiful resorts of God's Own Country," Kerala Tourism tweeted yesterday. The tweet may have been a jibe at politically turbulent times in Tamil Nadu, when 120 lawmakers from AIADMK were sequestered for days at a resort outside Chennai by VK Sasikala, who wanted to prevent anyone joining "rebel" O Panneerselvam or OPS.

The cheeky swipe was lapped up by the Internet

Admin if this handle deserves promotion....

Nice one.... I like the unique way of promoting Kerala Tourism

Both the BJP and the Congress-Janata Dal Secular have staked claim to form the government. When it was clear that the BJP was struggling to reach the half-way mark, the Congress quickly reached out to JD-S leader and former Prime Minister Deve Gowda and agreed that his son HD Kumaraswamy would be Chief Minister of a coalition government.

It is now up to Governor Vajubhai Vala to decide who will get first shot at proving their strength.Click for more trending news