The actor's wife shared details of their whirlwind romance and marriage 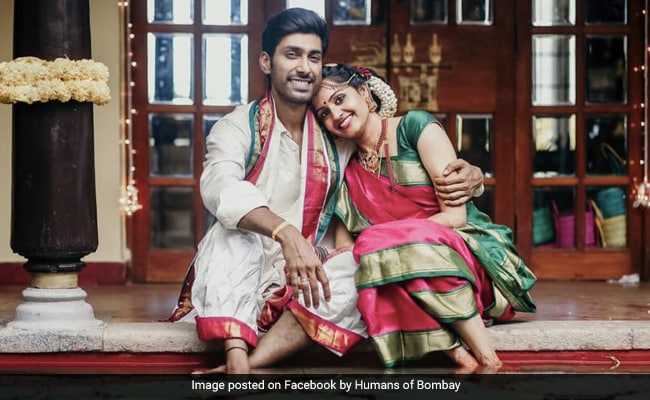 Actor Rishi with his wife, Swathi.

While the chances of a sudden gust of wind blowing our way or a quartet of violinists standing next to us when we find our soulmates are extremely slim, most of us love a mushy love story. And it looks like Kannada actor Rishi has gotten lucky in real-life just as he does in his films. The actor's wife, Swathi Parasuraman, recently shared details of their romance and dreamy wedding with Humans Of Bombay. In an Instagram post, she opened up about how the two knew they were perfect for each other.

Swathi said that it all started when she saw. Rishi acting in a play in Bengaluru. “After post-graduation, I moved to Bangalore for a job. I was new in town and decided to go to a theatre to watch a play. That's where I met Rishi; he was an actor in the play. His height and smile stood out amidst the crowd and I thought, ‘He's so charming!' During the interval, I congratulated him, ‘You dance really well'; he blushed! I was attracted to him so, the next day, I looked him up on FB and we started chatting.”

Their love blossomed over coffee and storytelling until they realised that they had fallen for each other.

Reliving the moment, she said, “For the next few months, we kept meeting, and on one of our dates, I told him, ‘I like you.' He said, ‘I was just going to say the same thing!'; he was looking for something long term too. The same evening, both of us blurted, ‘I love you'. It was telepathy.”

She stood by him as he tested his waters in the Kannada film industry, and the two supported each other's talents and passions. “At the time, Rishi was trying to get into movies and I had a 9-5 job. So, we wouldn't meet more than once a week. Still, he always supported me — I used to write plays and Rishi would always come to cheer me on. He'd give me books and inside, he'd write me notes like, ‘You've changed my life'. And whenever I could, I'd surprise him on set.”

"That's when he said, ‘I feel ready now! Are you?'; I said, ‘Yes!' Soon, we had our engagement and then, we planned our big fat Tamil Brahmin and Kannadiga wedding. Before tying the thali, our sacred thread, Rishi whispered, ‘Will you marry me?' and I said, ‘Don't you think it's a little too late now?' And till date, I tease him about it, ‘I was the one who initiated things,' & he says, ‘But I proposed to you first!'”

Explaining that the couple loves spending time together, she said, “We binge watch movies; Rishi discusses his scripts with me. Rishi's film is about to be released —so, we're really excited.”

Once the pandemic is over, the two want to buy a house and travel the world. “We have plans upon plans for the future — but step one is definitely going to be our honeymoon, and then everything else!” Swathi said.

Mr. Rishi was last seen in Kavaludaari and Sarvajanikarige Suvarnavakasha. Tell us what you think of the couple's love story.