Dressed in a black shervani and accompanied by wife Sophie Trudeau, the 46-year-old danced to the beats of a dhol at a venue that was decked up like a big, fat Delhi wedding. 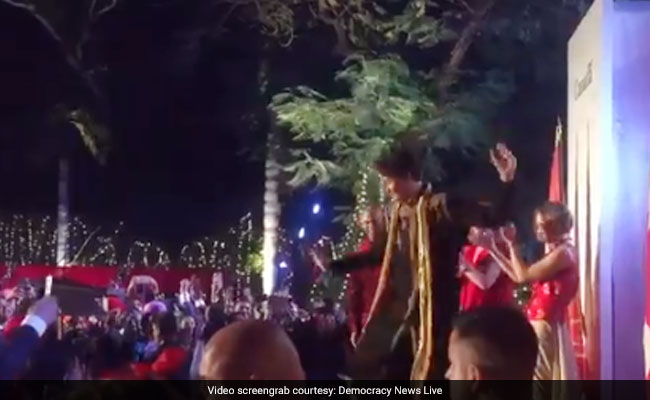 New Delhi: After a week of sporting shervanis and kurtas, Canadian Prime Minister Justin Trudeau showed off his Bhangra moves at a dinner in Delhi on Thursday evening. Before taking the stage at the event at Canada House in the capital, Canada's charming premier broke into a Bhangra - something he has been known to do back home. Dressed in a black shervani and accompanied by wife Sophie Trudeau, the 46-year-old danced to the beats of a dhol at a venue that was decked up like a big, fat Delhi wedding. His dancing skills were rewarded with appreciative cheering and whistles from the crowd.

The video was taken by journalist Rohit Gandhi from Democracy News Live. Soon after it was posted, the video became the talking point on Twitter. In 12 hours, the clip has scored nearly 60,000 views.

Promoted
Listen to the latest songs, only on JioSaavn.com
Watch it here:

Canadian PM @JustinTrudeau makes an entrance at the Canada house in New Delhi. Truly in the spirit of India. @DemocracyNewsLpic.twitter.com/ph19O7ysB4

Much like his sartorial choices for the India trip, Justin Trudeau's Bhangra has also drawn mixed reactions among Canadians and Indians.

My friggin' gawd. We may need an extraction team. https://t.co/Q9zWQk8qk7

Are you serious @JustinTrudeau? Are you trying to get a feature role in a Bollywood film?

I just threw up. I need to unsee that

OMFG... I am ashamed to say this man is our PM. pic.twitter.com/iDcO4Z7ymM

He is making even bigger fool of himself. He is an embarrassment to Canada. Please keep him in India.

Somebody should remind him every 10 minutes that he is a PM.

Some were impressed and somewhat smitten

Damn, those are pretty awesome bhangra moves. Not easy to do. https://t.co/ic9jbd6EBK

Trudeau dancing Bhangra lmaoooooooooooo he dances it better than me

Justin singh at its best

The Trudeaus landed in India last week and have so far visited the Taj Mahal, Ahmedabad, Mumbai and Amritsar. Canada's First Family's fashion choices have been panned by many as too... umm Bollywood. Justin Trudeau and his family have sported groom-like shervanis and heavily embroidered kurtas and sarees.