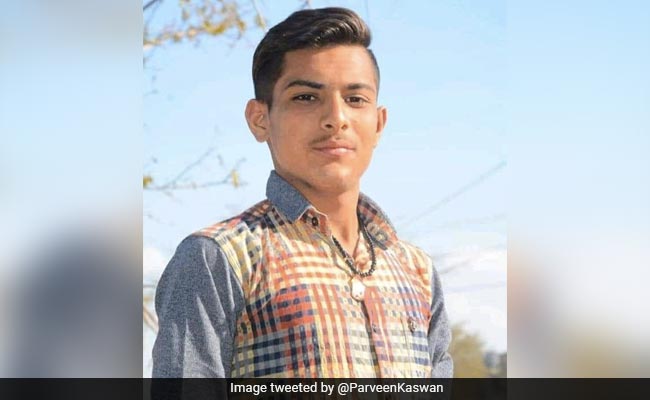 Mukesh Bishnoi and his friends fought off poachers in Jodhpur.

Social media users are full of praise for a teenager who bravely fought off armed poachers in Rajasthan, managing to overpower them. Mukesh Bishnoi, a 15-year-old from Balesar village, Jodhpur, rushed out on Sunday night when he heard gunshots - only to come face to face with two poachers, armed with a licensed 303 rifle. The class 10 student, along with two friends, managed to overpower the poachers after a fight, according to information shared on Twitter by The ERDS Foundation - an NGO working in Western Rajasthan for environment conservation.

Because of the intervention of the three youngsters, the poachers were outnumbered and overpowered. They left their gun behind but managed to escape with the dead chinkara.

"Gun left by poachers, but escaped with dead Chinkara in dark of night. Case reported to nearby police station," the NGO wrote while sharing photos of the teenager and the gun. "We salute such warriors."

He is Mukesh Bishnoi from Jodhpur(15), Class 10 student. Yesterday night heard a gun shot, ran towards that direction with two of his other friends. Had a faceoff with two armed (.303) Chinkara poachers. Able to overpowered gunned poacher after a good tussle. Kudos. @and_ecologypic.twitter.com/apNQjQxFFo

His tweet has collected over 6,000 'likes' and dozens of comments appreciating the teenager. Many hailed him a hero for continuing the Bishnoi tradition of protecting the environment.

Bishnoi community is always at forefront in conservation and protection of wildlife.

Give this kid bravery award. It's exemplary devotion towards life of an animal of such beauty and grace. My respect ????????

This afternoon, The ERDS Foundation also shared a video of Mukesh Bishnoi explaining the chain of events. In the video, he says that he grabbed hold of the poachers' gun but they managed to escape. The teenager and his friends event went out to look for them in a vehicle, but were unsuccessful.

Here is complete incident, narrated by himself only. @ParveenKaswan@CentralIfs@DrBhageerathIRS@my_rajasthan@MlaSanchore@sumitdookia@Saket_Badola@SanctuaryAsia@BittuSahgal@HCL_Foundation@WWFINDIA@IUCNAsia@TilotamaVarma@WCCBHQ@WCT_India@WCSIndiapic.twitter.com/dQIPlygWmX

An investigation into the incident is underway.

The Bishnoi community protects animals and trees as part of its religious beliefs. According to The Hindu, it is known to guard chinkaras near Jodhpur zealously. However, chinkara poaching is common despite the endangered animal being protected under Schedule 1 of the Wildlife Protection Act, 1972.