The hilarious video has been viewed over 4 million times 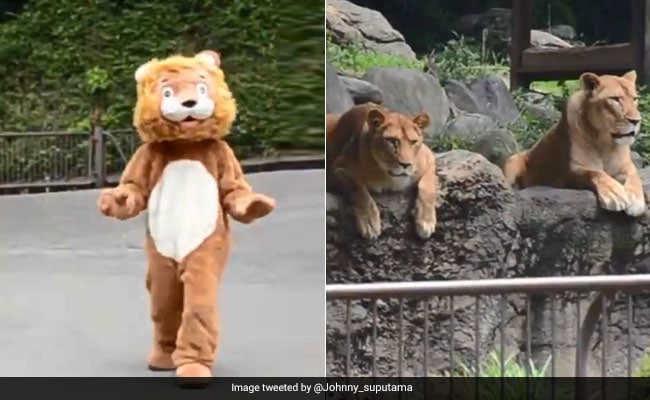 A viral video shows zoo lions and their unimpressed reaction to an escaped lion drill.

A zoo in Japan recently conducted a drill to train its staff on what to do in the scenario a lion escapes from its enclosure. Since they couldn't get a real lion for the drill for obvious reasons, the Tobe Zoo in Ehime got a person to dress up in a lion costume - with unintentionally hilarious results.

A video of the drill in progress, shot by a local news station according to Metro, has gone massively viral online. The footage, which shows a man in an adorable lion costume running around the zoo, has collected over 4.3 million views since being shared online on Saturday. But perhaps the most amusing reaction came from the zoo's actual resident lions, who were caught on camera silently judging the whole thing.

Their puzzled, thoroughly unimpressed reaction to the escaped lion drill has people in splits. Take a look at the video below:

Note the expression on the actual lions faces.
pic.twitter.com/azuJYQhLCw

Since being shared online, the video has gone massively viral online, making thousands laugh. It has been 'liked' over 82,000 times on Twitter, and netizens can't stop making memes and jokes on it.

Take a look at some of the funniest reactions to the lion escape drill video below:

Lions are like “what in the hell is this?” pic.twitter.com/NFiI1RNkpb

Lion1: “I dunno...did YOU hear anything about a break today?”

Lion2: “If they think we're breeding with that dude? No. Just no.”

They've just taught the lions their emergency plan. I'm not sure that's the smartest move.

Some tried to guess what the two lions were thinking

"My man would put up a fight before getting caught. This is insulting!"

“Are they mocking us, Martha”

The lions in the back: https://t.co/3QlHftgBaopic.twitter.com/4c4F6AW9gA

Others shared their own hilarious zoo drill stories

I worked in a zoo and can confirm they do these drills like this ???? one time they did a rhino drill and very slowly drove a golf cart around with a rhino label on it lmao

My friend worked at a zoo that did a elephant escape funny thing was during the drill a baby elephant did escape. He ran around even pushed over a popcorn cart. But ran back to encloser and acted all innocent. He had a fun time.