Ivanka Trump "Pretends" To Be A Scientist. Twitter Turns Her Pic Into A Meme

"I can't promise that I'll get this right, but at least we'll look the part, right?" Ivanka Trump is reported to have said as she donned a white lab coat, latex gloves and safety glasses for a science experiment. 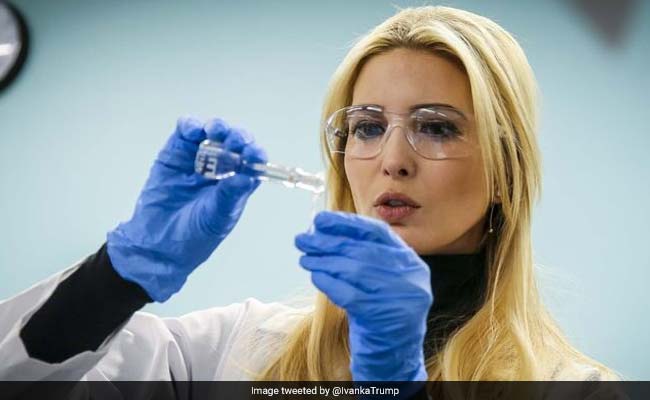 New Delhi: A photo of Ivanka Trump "pretending" to be a scientist has gone viral and been turned into a hilarious meme. Ms Trump, who serves as an adviser to her father, US President Donald Trump, was photographed wearing a lab coat and safety goggles and doing science experiments during a trip to a job training and science facility recently. Ms Trump enthusiastically shared the pictures from her trip on social media and it didn't take long for the jokes to start pouring in.

On Monday, Ms Trump travelled to the state of Iowa to tour labs and meet students at the Waukee Aspiring Professional Experience's (APEX) Innovation and Learning Center, reports The Gazette. The trip was to promote President Trump's infrastructure proposal, reports Business Insider.

As Ms Trump toured the facility, she stopped to take part in a series of experiments that the students there were conducting.

The experiments ranged from helping to write code, to programming a wind tunnel, to an examination of a zebrafish embryo.

During one of the experiments, Ms Trump tested the nicotine content of "vape juice" used in electronic cigarettes while wearing a pristine white lab coat, latex gloves and safety goggles.

"I can't promise that I'll get this right, but at least we'll look the part, right?" Business Insider reports Ms Trump as saying.

Incredible visit to Waukee APEX, a center where high paying jobs are seamlessly linked with motivated and highly skilled students. Through hands-on learning and #WorkforceDevelopment the careers of tomorrow are being created today! pic.twitter.com/QbLfdr6jkc

But netizens mocked Ms Trump for the staged photo op.

"Having your hair down is a lab safety violation," pointed out one person on Instagram. "1) Turtlenecks are a lab safety violation. 2) So is not tying back long hair. 3) So is pouring into a container that you're directly holding. 4) Nobody uses volumetric flasks like that," listed another.

Criticism also came from an engineer who accused Ms Trump of "cosplaying" as a scientist.

Hey @IvankaTrump it's great that you like to cosplay as a scientist on Instagram but some of us are an #ActualLivingScientist. Tell us about what you're doing in this picture. I'm making a battery. #ILookLikeAnEngineerpic.twitter.com/fW5CFxLYAF

And of course the picture was turned into a meme almost instantly.

So apparently Ivanka was cosplaying as a scientist yesterday while in Iowa. What a joke. The photo ops make her look ridiculous #TuesdayThoughtspic.twitter.com/eg1aPLzldL

I imagine that as she did this she softly whispered to herself, "Science." pic.twitter.com/h501KJ1erh

Me: What are you gonna dress up as for Halloween, Ivanka?

But some people were quick to point out the possible sexist nature of the memes:

Let's see: When John Kerry dressed up like a scientist, it was framed as Democrats loving science. When Ivanka Trump does it, she is dismissed with sexist "cosplay" terminology. pic.twitter.com/bqFV8WvV9h

Y'all leave Ivanka alone. She knew she wasn't a scientist when she did that photoshoot, the same way I know I'm not actually Steve Young when I put his jersey on. C'mon people!