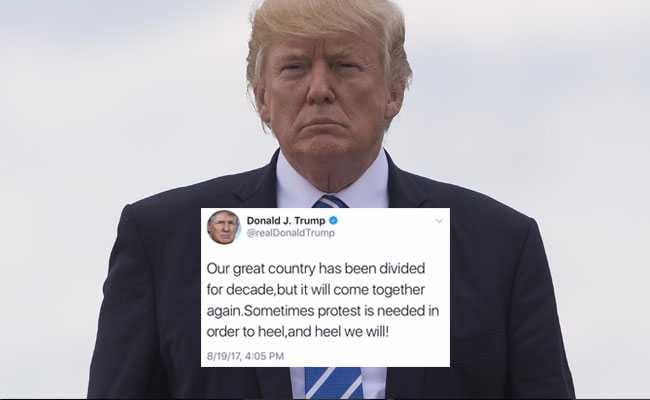 The spelling of the word 'heal' was eventually corrected and tweeted again.

Another day, another storm in the tweet-cup, and all because of one word. US President Donald Trump has once again found himself at the receiving end of Twitter's ire and mockery after he misspelled the word 'heal' twice in two tweets. And while the tweets were deleted and reposted correctly, Twitter can neither forget nor keep calm and carry on. Now screenshots of the original tweets are doing the rounds of the micro-blogging site, with many trolling the US President for the gaffe.

Here's what Mr Trump had tweeted:

At 4:05pm ET POTUS tweeted, then deleted this statement, encouraging the nation to... #heel. pic.twitter.com/0AWsxFY0st

He eventually corrected the spelling of the word 'heal' and tweeted again:

Our great country has been divided for decades. Sometimes you need protest in order to heal, & we will heal, & be stronger than ever before!

Twitter has since gone into overdrive tweeting about the typo, reacting pretty much the same way when Mr Trump accidentally tweeted the word 'covfefe'.

Among those mocking Mr Trump is none another Merriam-Webster dictionary.

Meanwhile, several others are tweeting about the heel-heal fiasco.

In his latest tweet, Trump commands America to heel.

Trump: I want to tail all of you laughing at me for misspelling heel that innyone can make a missteak! Sew, git off my ass.

Do not forget. Misspellerinchief #realdonaldtrump wrote heel for heal 4 times in 2 tweets & he wants english only immigrants. Ignorant!

The very sole of our nation depends on it pic.twitter.com/PDTtZHO827

Let's unite and #heel this country.