The happy couple danced to the 'Ra.One' song while dressed in Indian outfits. 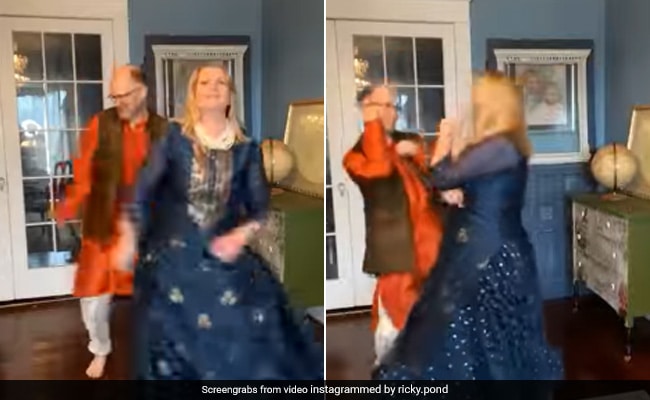 Remember the American man who broke the Internet by dancing to the Bhojpuri song Lollypop Lagelu and the Telugu track Butta Bomma. Well, we are happy to report that he is back and this time around he is grooving to the hit song Chammak Challo from the Shah Rukh Khan and Kareena Kapoor Khan movie, Ra.One. Ricky Pond was joined in his performance by his wife and it only seems fit, given that they are celebrating 25 years of marriage. Known across the Internet as the “Dancing Dad”, Ricky Pond and his spouse made sure to ace the performance down to their traditional Indian outfits.

Posting the video on the couple's 25th wedding anniversary, the duo appears to be thoroughly elated as they groove to the catchy track. While the graphic designer is seen wearing a kurta-pyjama with a jacket, his wife is dressed in a kurta and ghagra. Sharing the video, Mr Pond wrote, “Chammak Challo. Happy 25th anniversary.”

Reacting to the video, one viewer, Anjali Bisht said, “Hahaha,  really enjoyed it and Roxanne looks beautiful in this dress.”

Another viewer with the handle Asim Era wrote, “You guys are awesome.”

“Superb,” read the comment by a user named Chandni Tyagi. “I would have invited you both to my wedding reception with moves like that,” wrote this user, Teslaor.

And it looks like Mr Pond is going to be wearing those dancing shoes for a long time now. The Internet star's latest video features him performing Bhangra. “Kicking it with Dallin. Found this fun Bhangra dance on TikTok today. Thought we would share. Hope you like it,” the caption read.

Mr Pond, previously, also sent Madhuri Dixit fans into a tizzy by dancing to the song Dum Duma Dum from the film Dil. Tagging the actress, he wrote, “Madhuri Dixit Nene, borrowing one of your steps.”

Tell us which of the videos of the “Dancing Dad” is your favourite.

Did Anand Mahindra Say Stock Market Trading Should Be Taught In Schools?