The dog suffered serious puncture wounds from the attack 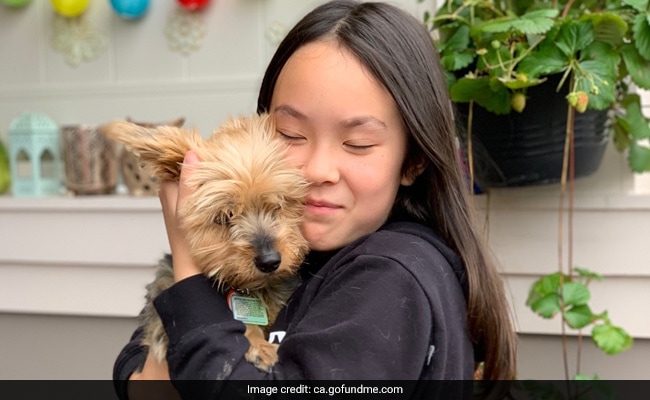 Macy, a rescue dog, jumped to the rescue of 10-year-old Lily Kwan.

The Internet has a new hero. We often hear tales of men and women show extraordinary courage in the face of adversity. This time around, it is man's best friend, a dog from Canada that has won the Internet's heart with her tremendous courage and loyalty. Macy, as she is called, is now an Internet star after successfully preventing a coyote from attacking a 10-year-old girl in Toronto. The feat seems all the more heroic as Macy is a Yorkshire terrier - one of the smallest breeds of the terrier type. This breed usually grows up to five to seven pounds only. Therefore, Macy had an unequal opponent in the coyote that is several times its size and is known to be a threat to smaller animals as well as humans.

A video of the incident available on YouTube shows Macy, a rescue dog, jump to the rescue of 10-year-old Lily Kwan. Ms Kwan is seen screaming for help as she runs away from the coyote that is chasing her. The footage from a home security camera then shows Macy freeing herself from Lily, who has held her by the lease, and throwing herself between the girl and the coyote. A terrified Ms Kwan continues running turning to look back at Macy, who is valiantly barking and going after the coyote. The coyote begins to then attack Macy, who continues to bark and fight the bigger animal, finally chasing it away as Mr Kwan runs to safety.

Macy sustained several injuries in the attack and is in the ICU at the veterinarian. She has to undergo surgery to treat the multiple puncture wounds that she sustained in the attack.

Recalling the incident, Ms Kwan told a local news outlet, ClickOrlando, “I ran to the sidewalk and started screaming for help, no one heard me. I just saw this coyote trying to attack my dog,” adding that she had to let go of the leash as Macy wouldn't follow her.

Macy however, as the clip showed, confronted the coyote to protect Ms Kwan. “She's a super brave dog, I love her so much and I just thought this tiny dog could protect this huge human being, trying to fight off this huge coyote,” she was quoted as saying. Ms Kwan's mother Dorothy Kwan seconded this opinion and said, “She's our little hero.”

Reacting to the clip, one user, Diana A, said, “Macy is a brave little dog and I have total faith that she'll recover completely.”

“Way to fight back Macy!” read another comment by a user who goes by the name BlitzClipz.

A third user, Shawn Wright, said, “This is a brave little dog, protecting the girl and then pursuing the coyote.”

A few users even wondered why neighbours did not intervene.

“Sad thing is how the girl was crying out for help and I don't see any doors opening,” a comment by Patrick Walker read.

Susan Bowers wrote, “Brave little dog. I wish someone would explain why not one single adult came out of their houses to help this little girl and her dog?”

Despite the injuries, Macy is expected to make a full recovery. A fundraiser to pay for her treatment has raised over $33,000.