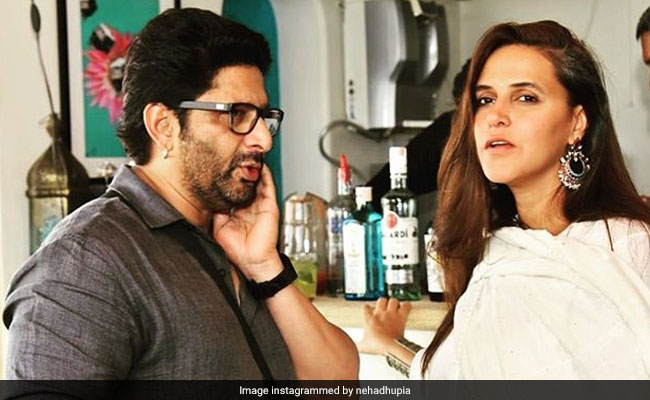 Neha Dhupia shared a 'caption this' challenge on Instagram.

Shutterbugs recently managed to capture a candid moment between actors Arshad Warsi and Neha Dhupia - and now the Internet can't stop suggesting hilarious captions for it. At an Eid party hosted by Roshan and Shaheen Abbas, Arshad and Neha were captured by cameras in the middle of a conversation. The picture, which was shared by Neha on Instagram a couple of hours ago, shows a bemused Arshad holding his cheek while Neha looks at the camera.

"Caption this," wrote Neha Dhupia while sharing the hilarious pic online - and Instagram rose to the challenge.

But before we list down some of the best captions, take a look at the picture:

The first comment on the pic was by none other than host Shaheen Abbas, who reminded Neha and Arshad that they were blocking her access to the bar while the picture was being clicked.

"U both were blocking me from the bar," she wrote, adding a laughing-face emoji.

But while Shaheen's caption suggestion/rebuke has collected a number of 'likes', a dialogue from Dabangg seems to be the real fan favourite.

But those were not the only caption suggestion - there were many more, each funnier than the first.

"Listen.... his tooth is paining... call the doctor," wrote one Instagram user.

"Gossip Queens," another suggested, while a third said: "Neha to Arshad- don't pretend like I hit you hard. Paps are watching. Back to work."

How would you caption the picture? Let us know using the comments section.