Inside New York's 'Worst Apartment Ever' - With No Bathroom, No Stove

"Before you ask, yes, this is a real apartment. This is what $1,650 gets you in the most desirable neighborhood in New York City." 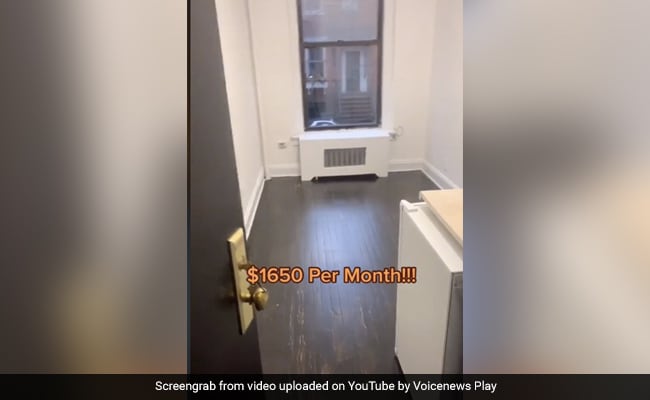 A one-room apartment in NYC is currently going viral online.

It apparently costs $1,650 a month to rent but doesn't have a toilet or an oven: TikTok users are going crazy over a video captioned New York's "worst apartment ever."

Its exact address is a mystery, and you won't find it listed on any rental sites, but that hasn't stopped a video of the tiny studio from being viewed 21 million times.

Captioned "Worst Apartment Ever NYC !!!," the video shows a single room with no bathroom, no stove, no freezer, one tiny fridge and a single closet.

"Before you ask, yes, this is a real apartment. This is what $1,650 gets you in the most desirable neighborhood in New York City," Knowlton says into the camera.

The realtor told AFP the apartment is in the West Village but declined to give the exact address for fear of offending the landlord.

The unit has not been posted online, which is common in New York for less-than-desirable units, so AFP is unable to independently verify the space.

But the video has certainly caused a stir, attracting more than 41,000 comments.

"That's not an apartment. It's a compartment," wrote Reanie.

Another user said you could get a 1,900 square-foot (177 square-meter) house in Texas for half the price.

For TikTok user Violette, it was all too real.

"This is literally what my first apartment in New York looked like... and it was in Times Square with a window facing a brick wall. It was hell," she commented.

Last year, Deutsche Bank ranked New York as the third most expensive city to rent behind Hong Kong and San Francisco, although prices have fallen due to the coronavirus pandemic.

The average monthly rent in Manhattan in October 2020 was $3,790, according to the website Rent Cafe, with an average apartment size of just 702 square feet.

In the video, Knowlton goes out of the apartment and down the hallway to the toilet and shower, which are in separate rooms and are "shared by the entire complex."

A key is needed to enter both, "for security purposes," Knowlton tells viewers, noting that the bathroom is "pretty clean" but doesn't have a sink.

He told AFP the previous tenant moved out in October and he doubts it will remain empty for long.

"It's one of the most desired neighborhoods in the world so people will rent it," Knowlton said.