Injured Monkey Shows Up At Karnataka Hospital For Help, Gets Treated. Watch

A video shows the monkey sitting calmly outside the hospital in Dandeli. 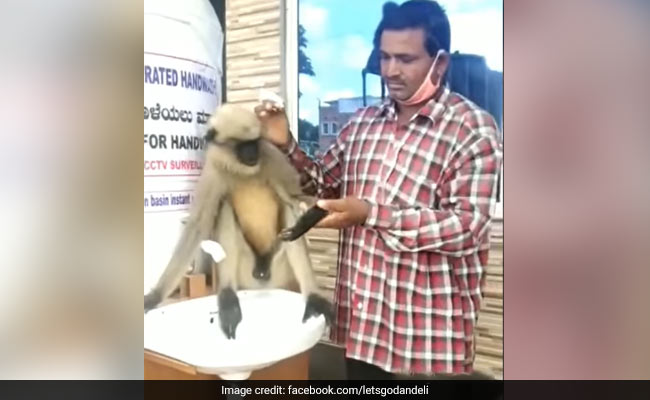 A monkey received medical help from staff at a hospital in Karnataka.

A video that is winning hearts on social media shows an injured monkey waiting patiently on the steps of a hospital in Karnataka, where he later received medical care. The monkey reportedly showed up at the Patil Hospital in Dandeli recently, where kind-hearted staff members took care of him.

A video shared on Friday by the Facebook page 'Let's Go Dandeli' shows the primate sitting calmly outside the hospital as other patients watch him curiously. One person was seen stroking the monkey's back and checking for injuries, while another was heard saying: "Ye Dr Patil ke hospital mein aaya hai treatment karaane (He has come to Dr Patil's hospital for treatment)."

The video goes on to show two people checking the monkey and applying medicine as he sits on a wash basin, only turning back once as if to indicate where the injury is.

The video was reposted on Twitter this morning by Indian Forest Service officer Sandeep Tripathi, who praised hospital staff for their compassion. "Amazing... an injured monkey turns up at Patil Hospital, Dandeli for medical care!" he wrote. "Praiseworthy compassion by staff."

The heartwarming video has been viewed over 3,000 times on Twitter. On Facebook, the longer version of the video has collected nearly 10,000 views and a ton of comments thanking the hospital staff for treating the monkey.

"God bless those people who helped this poor animal," a Facebook user wrote, while another said, "Big salute to the person who treated this monkey."

"So grateful to these docs!" a Twitter user added.

Dandeli is Karnataka is known for its thick jungles and wildlife sanctuary, which is home to elephants, monkeys and panthers.