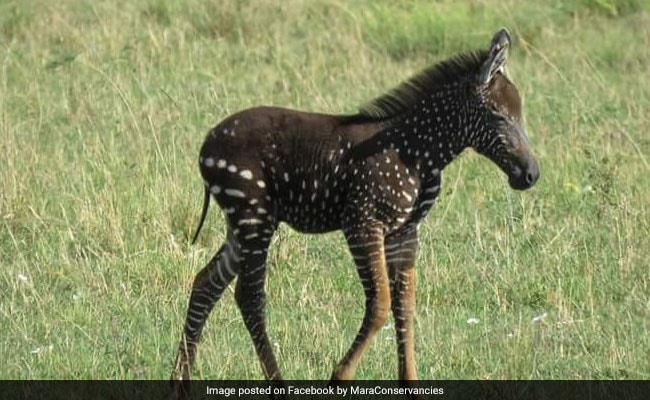 Tira the polka-dotted zebra was first spotted by a Maasai tour guide.

A polka-dotted zebra foal has caused massive excitement in the Maasai Mara National Reserve of Kenya. Daily Nation reports that the "incredibly rare" zebra, with spots instead of stripes, was first photographed by Antony Tira - a renowned tour guide-cum photographer at Maasai.

Mr Tira told Daily Nation that he was "confused" when he first saw the newborn zebra, and thought it had been "painted or marked for purposes of migration."

"At first I thought it was a zebra that had been captured and painted or marked for purposes of migration. I was confused when I first saw it," said Antony Tira.

He named the foal Tira.

A picture of the zebra with a dark coat and white spots was shared to Facebook by Maasai Mara Wildlife Conservancies Association on Saturday. Take a look at it below:

Tira's odd coloration could be the first recorded observation in the Masai Mara of a condition called pseudomelanism, according to the National Geographic. It is a rare genetic mutation in which animals display some sort of abnormality in their stripe pattern. The genetic abnormality is linked to the build-up of dark pigmented melanin in the skin.

Daily Nation reports that the huge excitement surrounding the polka-dotted zebra caused a stampede at Maasai Mara National Reserve with tour drivers and photographers crowding the place. According to Felix Migoya, the Mara tour guides and drivers association secretary, hundreds of tour vans have further scared the already-frightened foal.