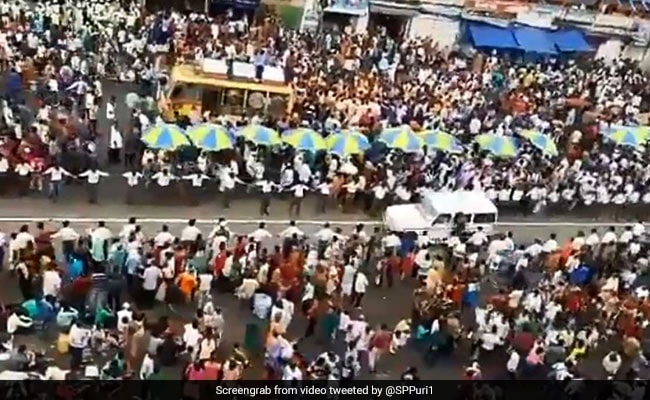 Volunteers formed a corridor to allow an ambulance to pass through during the Puri Rath Yatra.

During the Jagannath Puri Rath Yatra in Odisha on Thursday, lakhs of devotees came together to create a corridor and allow an ambulance to pass through easily even though the road stayed packed edge-to-edge with people. The remarkable feat was captured on camera, and the video shared on Twitter. The video, which has been widely viewed and shared online, shows people holding hands to form a human chain on either side of a road as the ambulance sails through.

"1200 volunteers, 10 organizations and hours of practice made this  human corridor for free ambulance movement possible during Puri Rath Yatra 2019," a Twitter account with the symbol of Puri Police said, sharing the video on the microblogging website on Saturday.

1200 volunteers, 10 organizations and hours of practice made this human corridor for free ambulance movement possible during Puri Rath Yatra 2019. pic.twitter.com/zVKzqhzYCw

The video has earned a lot of praise online, with many hailing the volunteers who made the human corridor possible.

"Commendable," wrote one person in the comments section. "Great work," said another.

Lakhs of devotees gather at the beach town of Puri in Odisha every year for the annual Jagannath Rath Yatra, for which chariots of Lord Balabhadra, Lord Jagannath and Devi Subhadra are built by artists.

Efforts have been made over the years to ensure that traffic does not hinder the passage of ambulances rushing patients to hospital. Last year, orders from the state police chief of Karnataka ensured that ambulances in the state would not have to wait for a VIP convoy to pass.