The contestant had to offer clues to his partner so he could guess the answer to "People Whose Last Name Is Obama". 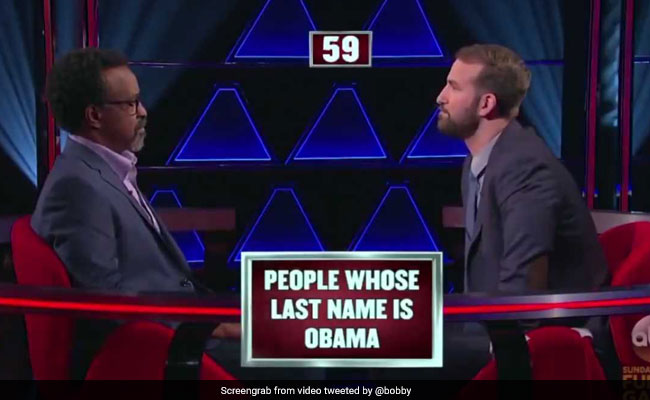 About a week ago, a contestant on the Turkish version of popular game show Who Wants To Be A Millionaire? went viral for using up two of her lifelines to answer where the Great Wall of China is located. Now, a similar game show fail has gone viral - this time because a constant confused former US President Barack Obama with Al Qaeda leader Osama Bin Laden. A clip of the unfortunate gaffe has collected over 2.5 million views since it was tweeted on August 14.

Comedian Evan Kaufman was a contestant on the game show The $100,000 Pyramid - a word association game and was paired up with actor and comedian Tim Meadows. Mr Kaufman had to offer clues to his partner so he could guess the answer to "People Whose Last Name Is Obama".

That's when Mr Kaufman, who incidentally has Barack Obama as a follower on Twitter, offers the clue "Bin Laden".

While a longer clip shows Mr Kaufman offering "Barack" as his second clue, this clip - with over 35,600 'likes' and more than 12,700 retweets - has all of the Internet's attention.

choking on my own tongue. pic.twitter.com/9VtRysTXEL

Mr Kaufman eventually took to Twitter to share his side of the story. "Let me tell you the story about perhaps the most embarrassing moment of my life. #KillMe," he tweeted. After explaining his state of mind during the show in his initial tweets, Mr Kaufman says he froze when he saw the square flip. "I can't just say Barack. What I should have said was, 'Michelle, Sasha, Malia, Bo! The PORTUGUESE WATER DOG BO!'" he tweeted. Instead:

Here's what my brain decided. Who is associated with Obama? Who did he kill? What sounds like Obama! (8/13)

"And so you have this perfectly viral clip. A clip that is insanely funny. It would be so funny if it wasn't me," he tweeted further. He eventually went home with $8500.