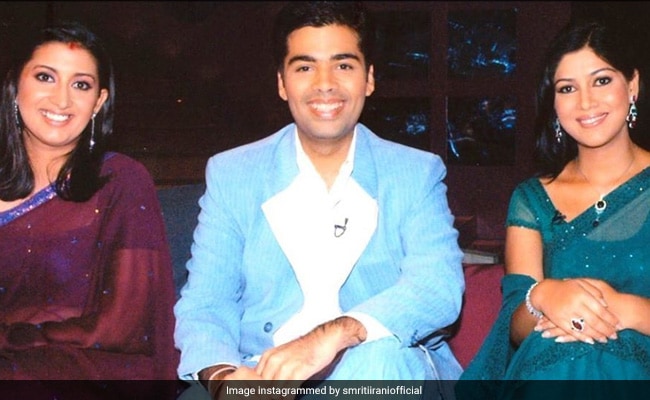 Smriti Irani shared an old photograph from her appearance on 'Koffee With Karan'.

Union Minister Smriti Irani went down memory lane this morning and dug out a photograph 15 years old. For the popular 'Throwback Thursday' Instagram trend, Ms Irani shared a photograph from her appearance on Karan Johar's talk show, 'Koffee With Karan'.

Smriti Irani, who became a household name with Ekta Kapoor's TV show 'Kyunki... Saas Bhi Kabhi Bahu Thi', had appeared on the first season of 'Koffee With Karan' back in 2005. She was accompanied by Sakshi Tanwar, known for her role as Parvati in another Ekta Kapoor show, 'Kahaani Ghar Ghar Kii'.

The photograph that Ms Irani, 43, shared on Instagram this morning shows her with Karan Johar and Sakshi Tanwar on the Koffee couch, dressed in a burgundy saree as she smiles for the camera.

"POUT MIA alert," she wrote while sharing the old pic, referring to the filmmaker's famous pout - a permanent fixture in most of his photographs today. "Throwback to a time @karanjohar smiled in photos taken."

Ms Irani continued her caption by writing: "Notice how slim yours truly was. Totally blame the damn hampers for the weight gain."

With both Tulsi and Parvati in one frame, no wonder Karan Johar smiled. Take a look at the throwback pic below:

POUT MIA alert ????Throwback to a time @karanjohar smiled in photos taken ... P.S—- notice how slim yours truly was ????‍♀️totally blame the damn hampers for the weight gain ????#tbt ❤️

Ms Irani's blast from the past collected over 8,000 'likes' within minutes of being posted.

"Mam, you look amazing always," wrote one person in the comments section. "Love your witty quotes," said another, while a third added: "Two women who ruled the prime slot on Indian television. Hats off."

This is not the first time that Smriti Irani has used 'Throwback Thursday' to treat her followers to old pictures. In October, she had shared another throwback photograph – one that showed her dressed in pristine white.