A month-old rhino calf is hoping to find his mother with the help of Kaziranga officials. 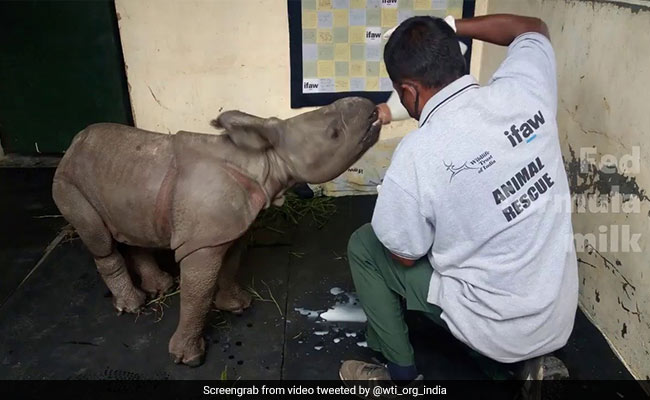 A keeper at CWRC feeds the baby rhino.

The young rhino was rescued on Sunday with the help of the Centre for Wildlife Rehabilitation and Conservation (CWRC), run by the Wildlife Trust of India. It is now being taken care of at CWRC while officials search for its mother.

"A young rhino calf which got separated from its mother was rescued with the help of CWRC. Foresters of @kaziranga_ are trying to locate its mother and reunite them," the Kaziranga National Park wrote on Twitter while sharing a pic of the baby rhino.

"Where are you mom?"
A young Rhino calf which got separated from its mother was rescued with the help of CWRC. Foresters of @kaziranga_ are trying to locate its mother and reunite them.
@wti_org_india@ritupabanborah@samshulwildvetpic.twitter.com/UqgUJ0s7RN

Adding to the story, the Wildlife Trust of India explained that the forest staff called the Centre for Wildlife Rehabilitation and Conservation after they couldn't find the rhino's mother.

The baby rhino was examined by a vet and found to be dehydrated. It was made comfortable to alleviate its distress and fed milk formula by CWRC staff. In a sweet video the Trust shared on social media, the calf can be seen resting on a cosy bed and drinking milk from a bottle.

A month old rhino calf is hoping to find his mother with the help of @kaziranga_ and our team. Meanwhile it settles at #CWRC while you show some love and hope for a reunion with mom #rhino. @ifawglobal@vivek4wild@AzzedineTDownes@deespeakpic.twitter.com/wZX88s0vRH

The story of the lost baby rhino has struck a chord with hundreds on social media. On Twitter, several netizens commented on the two posts and hoped for a quick reunion of mother and calf.

Hope the calf's Mom is found soon, if it hasn't been already. An update on Twitter when found, will be good.

The Indian Rhinoceros, also called Greater One-horned Rhinoceros, is a large mammal is primarily found in parts of north-eastern India and Nepal. Today, about 3,000 Rhinos live in the wild, 2000 of which are found in Assam's Kaziranga alone, according to the national park's website.