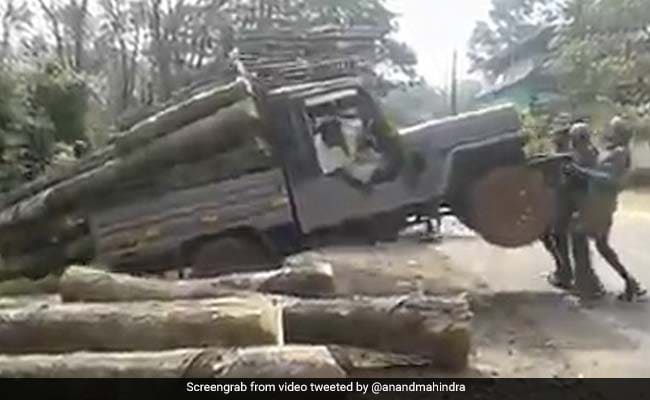 Anand Mahindra is known to be a fan of all things innovative. The 65-year-old businessman often shares examples of "jugaad" or creative hacks that catch his eye on social media. This morning, he took to Twitter to share a video of a tipper truck that captured his attention despite being - as he put it - hugely unsafe.

A tipper truck, also known as a dump truck, is a vehicle with a rear platform which can be raised at its front end, thus enabling a load to be discharged.

In the video, a group of people turn a regular truck into a tipper by coming together to raise its front end. Using nothing but their bare hands, the three men raise the front end of the truck to offload logs of wood in a maneuver that Mr Mahindra branded to be in violation of all safety norms.

"Got this random video today. Crazy," wrote Mr Mahindra while sharing the video on the microblogging platform this morning. "They've made this the cheapest possible tipper truck. Violates all safety and loading regulations. Hugely unsafe for those holding the truck up," he said.

However, despite his criticism of the video, he hailed it as another example of people's drive to manage even with limited resources. "Yet I marvel at how our people persevere & manage without resources," added Anand Mahindra.

Got this random video today. Crazy. They've made this the cheapest possible tipper truck. Violates all safety& loading regulations. Hugely unsafe for those holding the truck up. Yet I marvel at how our people persevere & manage without resources. pic.twitter.com/wYbzp7KjUT

In less than half an hour of being shared on Twitter, the clip had collected over 25,000 views and hundreds of comments:

But those 3 Guys are real Bahubali

Necessity is the mother of all Jugad.

Mr Mahindra has shared many examples of jugaad that have caught his eye. Often used to signify creativity in making the best out of meagre resources available, jugaad is celebrated as an example of the Indian spirit of resourcefulness and enterprise. Last year, Mr Mahindra had tweeted a video of an excavator made out of a khatiya or bed, and before that, it was a "kela-koneyer" that had impressed him.