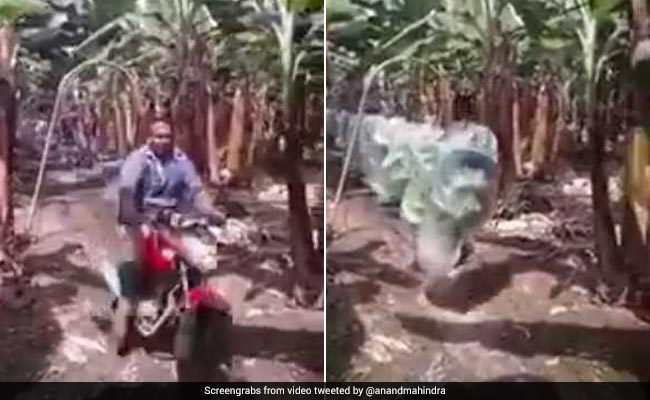 That Anand Mahindra 'loves wild and wacky jugaad videos' is a fact well-established. Besides the one he has shared about an hour ago, he often shares such videos on Twitter, much to the delight of his followers. This new one is about an innovation which he calls a 'kela-konveyor'. The video shows the perfect jugaad to transfer bananas out of the fields and will definitely leave you impressed.

"Got this clip of a commendable exercise in jugaad. A Banana-Bike Brigade? Or better still a Kela-Konveyor?" says the Mahindra Group Chairman in his tweet, calling the method 'frugal' and 'appropriate'. You'll just have to watch the video to understand the technique Mr Mahindra is talking about.

Got this clip of a commendable exercise in jugaad. A Banana-Bike Brigade? Or better still a Kela-Konveyor? We have a Material Handling Company in the Group- Mahindra Tsubaki-but have to admit I don't think they have created anything so frugal & appropriate!! pic.twitter.com/2FMaFnSSO0

Since being posted about an hour ago, the video has collected almost 6,000 views, more than 500 'likes' and several comments on Twitter.

Promoted
Listen to the latest songs, only on JioSaavn.com
"A banana train. Innovative and frugal. Indians never ceases to amaze you," says one Twitter user on the video. "Amazing and innovative... sahi jugaad kiya. Necessity leads to innovation," says another.

Many also suggested names for the practice. Mr Mahindra couldn't help agree with one.

Yes I concede. That's a much better label... https://t.co/8qLqP0RNym

Anand Mahindra often shares such videos of jugaad of some kind on Twitter.

Love wild & wacky jugaad videos. Now this guy's wheels may not have the acceleration or torque of a Tesla,but I applaud him for his alternative thinking & his will to follow-through on his idea.He would be a great R&D resource. (Now I just wonder if this buggy is hernia-proof!) pic.twitter.com/2fQ4h308dn

Iconic. A way to 'Rise.' Thanks for sharing this.Can you help locate him? I'd like to buy it for our museum & give him 4 wheels in return.. https://t.co/uwQ5wYcDpW

Which innovation has been your favourite so far? Tell us using the comments section below.Click for more trending news