Mumbai python video: The Maharashtra Nature Park is home to a number of snakes, both venomous and non venomous. Like all constrictors, pythons are non-venomous snakes. 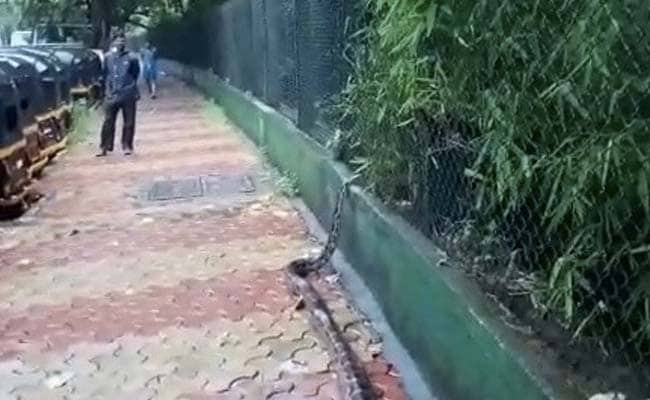 A huge python was spotted at a footpath in Mumbai in a sight that has left locals and social media viewers stunned. The serpent, estimated to be between 8 to 10 feet in length, was filmed near the Maharashtra Nature Park in Mumbai.

Also known as the Mahim Nature Park for the creek from which it was reclaimed, this park is situated close to Dharavi, Asia's largest slum. Considered to be an oasis of greenery in a city of concrete, the Maharashtra Nature Park is home to a number of snakes, both venomous and non venomous.

One such snake appears to have left its abode to explore the Maximum City. The video, which is being widely circulated on social media and over messaging platforms, shows the python on a footpath, next to a row of auto-rickshaws parked by the road. The python, which came out of the nature park, was spotted slithering back inside through a gap in a wire fence even as a few locals watched it with curiosity. Like all constrictors, pythons are non-venomous snakes.

#NDTVBeeps | A python was spotted near Maharashtra Nature Park in Mumbai. Locals estimate its length to be between 8 to 10 feet pic.twitter.com/oQeeRSLUba

According to the Nat Geo Traveller, Maharashtra Nature Park is home to more than 14,000 species of vegetation, 120 varieties of birds and a large population of reptiles. The common cobra, vine snake, rat snake, and chequered keelback are some of the snakes that can be found here.

The 37-acre green pocket tucked away in the middle of bustling Mumbai hosts over 120 species of birds and 75 species of butterflies, as per a Bloomberg report.