The photo, from 1971, was taken at a science conference in the United States. It included 37 men - mostly Caucasian - and a lone African-American woman. Thanks to Twitter, we now know her name and her story. 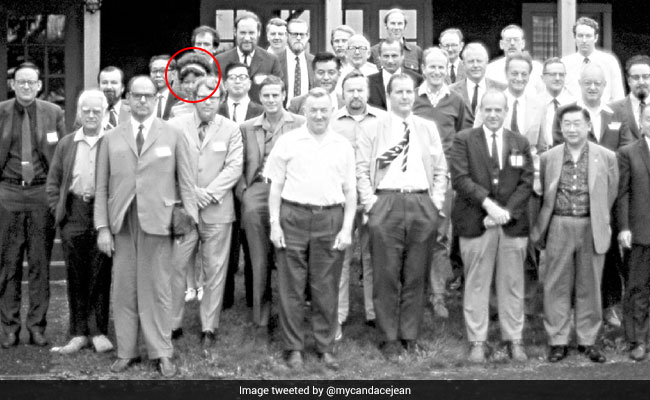 New Delhi: Candace Jean Andersen, who is an illustrator, was conducting research for an upcoming picture book when she stumbled across a photograph that caught her attention. The nearly 50-year-old photo sparked a frantic 10-day online hunt for one woman.

The photo, from 1971, was of scientists at the International Conference on the Biology of Whales in Virginia, USA. In the sea of male - and mostly Caucasian - faces, Ms Andersen noticed a lone African-American woman, her face partially hidden behind another person. An accompanying article identified all the men but the woman was listed as "not identified."

"She is the only woman, & the only one captioned "not identified" in the article I found the photo in. All the men are named," Ms Andersen tweeted, wondering why.

Curious to find out who the "mystery woman" was, Ms Andersen took to Twitter to ask for help in her search.

The woman in this photo was an attendee at a 1971 International Conference on Biology of Whales.

She is the only woman, & the only one captioned "not identified" in the article I found the photo in. All the men are named.

Can you help me know her? pic.twitter.com/MifZvdRXRr

Thanks so much for all the retweets, everybody!

Here is a close-up of Mystery Woman, unfortunately mostly blocked from the camera.

The conference was in June (1971) in Virginia, with participants from 10 countries.

Why is *the only* woman listed as "not identified?" Arg! pic.twitter.com/eweEB1q9c9

Thousands of people from all around the world joined in the search. Slowly, amateur sleuths on Twitter started unearthing leads - some that were dead ends and others that were false starts. Ms Andersen regularly provided updates on the search in a detailed Twitter thread.

Then one day, it seemed as if Ms Andersen had found who she had been looking for. Someone identified the woman in the black-and-white photo as Sheila Minor.

It was later found that the man who took the photo thought the woman was probably support staff and not even officially invited to the conference.

Well, @AllenZiphiid72 reached out to *Don Wilson* (Curator Emeritus of Mammals at the Smithsonian).

Don agreed with what Bob had written:

"Her name is **SHEILA JONES**..." maiden name Minor. She worked as a Collections Technician in mammals with FWS. pic.twitter.com/gseQ026VvW

Suzanne then reached out to her former boss (G. Carleton Ray), **who took the photo.** Ray was certain she (Sheila?) wasn't officially "invited." He too thinks she was support staff.

What do you think, Twitter?— Candace Jean Andersen (@mycandacejean) March 12, 2018

Do we assume she's Sheila?

Do you think the photo was a quick snapshot, and she just happened to be there?

I wonder what all her papers are?
Did she significantly contribute to the conference?

If she worked for Fish & Wildlife Services then, I wonder what she's doing now? pic.twitter.com/DrY3YzXJmW

But, as Smithsonian.com reports, Ms Andersen didn't want the trail to end there. So, on Facebook, she reached out to the woman she thought might be Ms Minor.

Turns out, Ms Minor was indeed the woman in the photo.

At the time that the photo was taken, she had been a biological specimen analyst at the Fish and Wildlife Service. (So no, not "support staff.") She then went on to have an illustrious 35-year career with the US government and retired 12 years ago as a high-ranking environmental protection specialist.

Now retired, the 71-year-old grandmother of five was surprised to learn that the Internet had been looking for her.

She told the New York Times she wasn't too bothered about going unnamed in the 1971 photo.

"It's kind of like, no big deal," she said. "When I try to do good, when I try and add back to this wonderful earth that we have, when I try to protect it, does it matter that anybody knows my name?"

But she admitted to CNN that she has been enjoying the attention she is now receiving.

"My other friends have told me 'It's about time the world knew about you,'" CNN quotes Ms Minor as saying.

Ms Andersen, meanwhile, says speaking with Ms Minor has been nothing short of inspiring.

"Sheila is one of the most humble, kindhearted people I've ever spoken to," she tweeted after an hour-long phone conversation with her.

Promoted
Listen to the latest songs, only on JioSaavn.com
In fact, Ms Andersen's efforts even got the attention of "Hidden Figures" author Margot Lee Shetterly.

@mycandacejean you're a hero! Just read the entire thread-- unbelievable. Thanks for shining the light on scientist Sheila Minor. https://t.co/CPAwtvYPoX

In 2016, Ms Shetterly's book about a team of African-American women mathematicians at NASA whose work was never recognised was made into an Oscar-nominated film starring Taraji P Henson, Octavia Spencer and Janelle Monae. Click for more trending news