Read inOther Languages
This Article is From Jun 02, 2020

Pythons kill their prey by suffocating them. 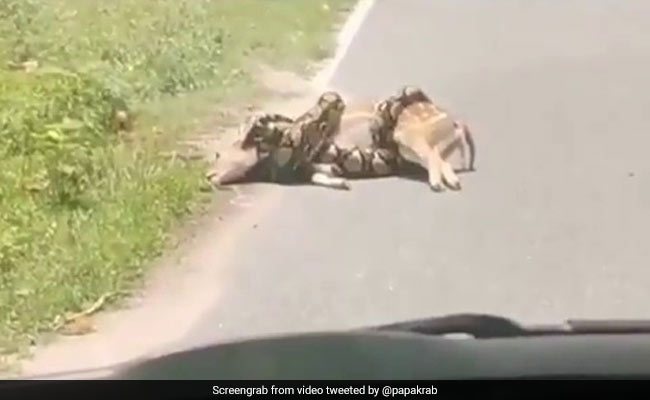 A python was filmed strangling a deer in Thailand.

A spine-chilling video that is being widely circulated and debated online shows a huge python strangling a deer. Filmed in Thailand on Friday, the video shows the predator and prey lying on the side of a road in an open zoo in the country. The clip has gone viral for its surprising ending and sparked a debate around human interference.

The 24-second video was shared on Twitter by the assistant director of Dusit Zoo, who said that it was filmed at Thailand's Khao Kheow Open Zoo. Footage recorded from a car shows the huge python coiling itself around the deer - a common tactic used by the snakes to squeeze their prey to death. In this instance, however, timely interference from a person standing off-camera saves the deer's life.

The video shows a person using a long branch to repeatedly poke the python until it slithers away, leaving the deer free and scrambling for safety. Watch the video below:

Since being posted three days ago, the video has garnered over 9.4 lakh views and 17,000 'likes', along with dozens of comments debating whether or not the person should have interfered to save the deer from certain death.

"Glad they helped, because the deer is under the care of the zoo," wrote one person in the comments section.

"Don't mess with the food chain," another countered.

The video was also reposted by a wildlife enthusiast in India, who asked his followers to weigh in on whether the man's actions were justified.

What do you think? The man was right or wrong?#wildlife#wildlifephotography#jimcorbett#tuesdayvibes@NalinYadavIFS@SudhaRamenIFS@JamirShaikh_IFS@vikas_yadav_ifs@ParveenKaswan@s_singh_ifs@SmithamolMS@NatGeoIndia@NatGeoPhotos@susantananda3pic.twitter.com/ZPmAJIjVNI

"When you have a choice between kindness & right, always be kind," wrote IFS officer Susanta Nanda in the comments section.

"Very wrong, we should NOT interfere with the ways nature," a Twitter user said.