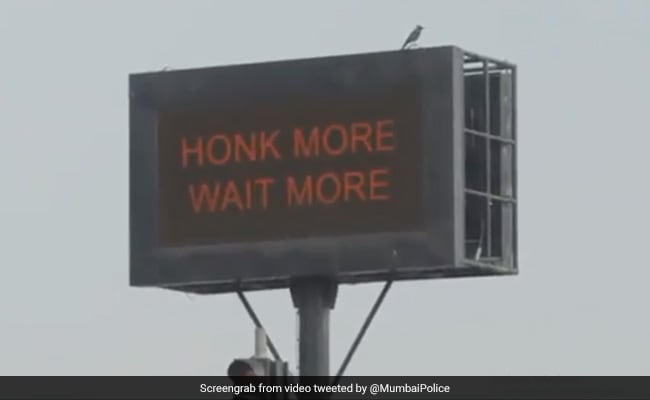 Mumbai Traffic Police has quietly come up with a unique initiative to discipline the city's perpetual honkers, who love to blare the horns of their vehicles even when the traffic signal is red.

In order to curb the alarming rise in the noise pollution levels in the country's commercial capital, it has installed decibel meters at certain select but heavy-traffic signals to deter habitual honkers through a campaign named 'The Punishing Signal'.

Joint Police Commissioner (Traffic) Madhukar Pandey said that the decibel monitors are connected to traffic signals around the island city, and when the cacophony due to needless honking exceeds the dangerous 85-decibels level, the signal timer resets, entailing double waiting time for all vehicles.

"Mumbai is one of the noisiest cities in the world and lot of this noise is at the traffic signals where Mumbaikars honk even when they see the signal is red. Jointly with the FCB Interface, we have launched this innovative solution to arrest the honking menace," Mr Pandey said.

The decibel meters have been installed and activated at major junctions or signals at the Chhatrapati Shivaji Maharaja Terminus, Marine Drive, Pedder Road, Hindmata Cinema Dadar and Bandra.

Mumbai Police shared a video of the experiment with a short introduction by a professional actor -- in the garb of Mumbai's lovable but oft loathed 'Pandu Havaldars' who once used to hide behind the signals and quickly pounce on speeding traffic violators.

In his 'Mumbaiya' style, he opens the video that has gone viral: "Welcome! To the Honking Capital of the world..! Here, people honk even when the signal is red! Its easy, noa! Maybe they think that by honking, they can make the signal turn green faster! They just don't understand..", followed by a massive cacophony at some of the signals.

The short video goes on to show how some uncontrollable honkers blared their horns, waited, again honked and then shut up -- learning the hard way that honking is not the way out (of the traffic jam).

Horn not okay, please!
Find out how the @MumbaiPolice hit the mute button on #Mumbai's reckless honkers. #HonkResponsiblypic.twitter.com/BAGL4iXiPH

"This is intended more for creating awareness instead of punishment. Presently it is being launched on an experimental basis to study the public response," Mumbai Police spokesperson and Deputy Commissioner of Police Pranaya Ashok told IANS.

Thumping the Mumbai Traffic Police on their back for the initiative, renowned anti-noise pollution crusader Sumaira Abdul Ali said this is the first time in decades that they (the police) have got around to "enforcing" something which activists have been demanding for years.

"This is a global first as we have not heard of such a thing anywhere in the world and I wholeheartedly congratulate the Mumbai Traffic Police for doing something concrete to make the city roads less noisy and eventually noise-free," Ms Ali told IANS.

FCB Group Chairman and CEO Rohit Ohri said the new campaign is "a fantastic creative solution for bringing about awareness and behaviour change among Mumbai drivers."

The Chief Creative Officer Robby Mathew smiled and said that at times "the stick works better than the carrot", and a signal that gives a gentle rap on the knuckles for needless honking is a good idea".

Joint Commissioner of Police Pandey pointed out that honking is not only a bad habit, but also an act of traffic indiscipline besides being a major health and pollution hazard. In Mumbai, 149 and 460 honkers were booked in 2018 and 2019 respectively for honking offences.

"Sadly, many Mumbaikars indulge in reckless honking which not only causes noise pollution, but hurts eardrums, increases heart rate, causes stress and adds to traffic chaos. All recognise it, but do little to curb it. With this, hopefully we may create better road discipline and ensure a honk-less, noise-free and stress-free travel on the Mumbai roads," Mr Pandey said.