Homeless Man Asked For Cash. Watch What Kindhearted Stranger Did Next...

"I saw this man go up to a group of people and say 'have you got any change for us?'" 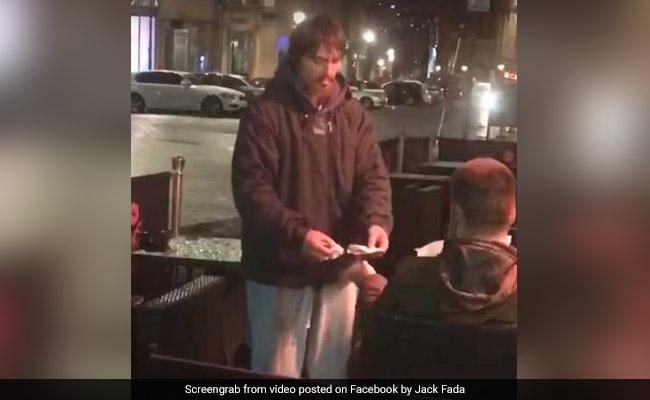 The homeless man handed over a receipt for the money he withdrew.

The moment a homeless man asked a group of friends for money left viewers pleasantly surprised after one man handed over his bank card and PIN number, asking him to withdraw money for himself. Heartwarming footage going viral shows the homeless man returning the card along with the receipt he received for withdrawing 20-pounds. The incident took place outside a bar in Newcastle, UK.

In the video, shared on Facebook, a bearded man is seen approaching a man sitting outside Harry's Bar and handing him a bank card and a receipt. The video was shared online by Jack Fada who, according to the Mirror, is a builder who shot the footage while doing work on a nearby nightclub.

"I used to work in that area and you see homeless people asking for money round there all the time," Jack, 27, told Chronicle Live.

"I saw this man go up to a group of people and say 'have you got any change for us?'

"One of the blokes said 'I've got nothing on me but take my card and my pin number and take 20-pounds out for yourself.'

"I thought it was amazing so I got my phone out and started recording it.

"I got him on the way back from the cash point giving the guy the receipt to show he'd just got the 20 pounds."

"Homeless man goes up to a group of people and asks for money, the bloke gives him his bank card and PIN number and tells him to take 20 quid for himself. Don't dare tell me Newcastle isn't the greatest place on earth," Jack wrote while posting the video on Facebook.

Since being posted online, the video has collected over 1.6 lakh views and hundreds of comments, as many praised the kindhearted stranger and also the homeless man who took out only as much money as he was asked to.

"Renewed my faith in human nature," wrote one person in the comments section. "What an amazing thing to do, well done," said another.