The 41-year-old told Ms Jenner that she wants to keep her custom G650ER aircraft pristine. 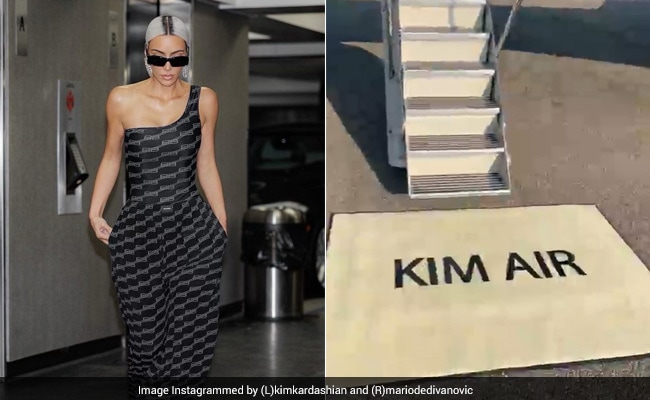 The reality TV star Kim Kardashian has always been in news for her candid comments. This time, the Skims founder warned her younger sister Kendall Jenner about her strict set of rules for passengers flying in her private jet. Ahead of Ms Jenner's trip to Milan for the Prada fashion show, Ms Kardashian laid down rules for her while she was chatting on phone with the model in Thursday's episode of Hulu's "The Kardashians."

The 41-year-old told Ms Jenner that she wants to keep her custom G650ER aircraft pristine, reported New York Post. When Ms Jenner told her sister that she is planning to get a "quick spray tan" before their flight. To which Kim Kardashian reacted with hesitation. She asked, "A spray tan before my flight?"

Ms Jenner explained and said, "No, it's a three-hour one so I sit in it for three hours and then shower it off." Ms Kardashian, however, was not cool about it, she knew that it can leave a stain on her cashmere seats. "Have you seen the cashmere seats? You cannot get your spray tan on my cashmere seats."

The actor also asked her sister if she would like some snacks during the flight. "Let me know if you like any snacks because I have, like, waffles and I have a freezer so, like, I live it up on there."

And when Ms Jenner requested pasta, she criticised her decision, saying, "We're going to be in f-king Italy. We're not going to eat pasta before we go."

This is not the first time, the Reality TV star earlier revealed that she forbids shoes on Kim Air.

Earlier this week, Ms Kardashian was in news for her sartorial choice - she attended the Milan Fashion Week wearing a sparkling gown from Dolce & Gabbana that seriously restricted her movement. Ms Kardashian was seen bunny-hopping up a flight of stairs with the support of the handrail and lying back in her car rather than sitting due to the skintight dress.