"It's moments like this, that I am reminded, this is why I do the job." 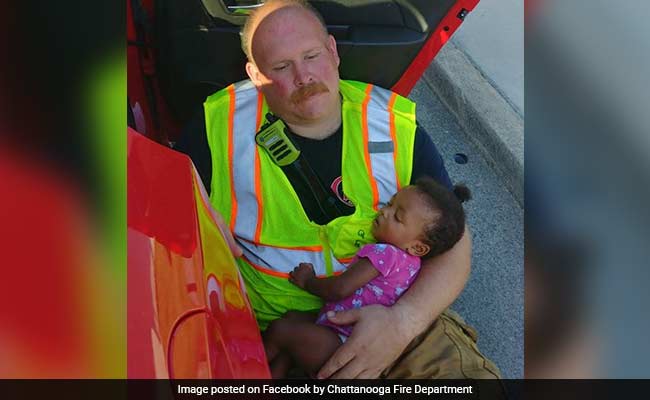 A heartwarming picture of a firefighter cradling a baby involved in a car accident has touched the Internet. On Saturday, Captain Chris Blazek of the Chattanooga Fire Department in Tennessee, USA, responded to a car accident involving a pregnant woman, who was driving with her three young children in the back seat.

The Chattanooga Fire Department shared Mr Blazek's story of the aftermath of the accident on Facebook.

Three small children, aged four months to seven years, were in the car. Their pregnant mother was "hysterical" due to stomach and back pain when firefighters arrived at the scene of the accident.

"Both big girls were fine, but the baby was screaming hysterically too," wrote Mr Blazek. "So I took her out of her car seat and did a quick physical exam to make sure she was okay. She immediately laid her head on my shoulder."

Mr Blazek writes that he then decided to sit down with his "new friend" who immediately fell asleep in his arms.

A picture of him cradling the baby girl, leaning against the open door of a car, has now gone viral on Facebook with over 10,000 'likes' and more than 4,000 'shares'.


The picture has garnered hundreds of comments praising the firefighter.

"This is what these guys are all about. Not just putting out fires but saving lives and caring," writes one commenter. "I have known Chris Blazek since high school, and this is not surprising to me at all. He is one of the kindest people you'll ever meet," says another.

Promoted
Listen to the latest songs, only on JioSaavn.com
The sweetest comment, however, comes from Mr Blazek himself, who ends his note by saying: "It's moments like this, that I am reminded, this is why I do the job."