He Wore Ukraine Flag. She Wore Russia's: The Truth Behind This Viral Pic 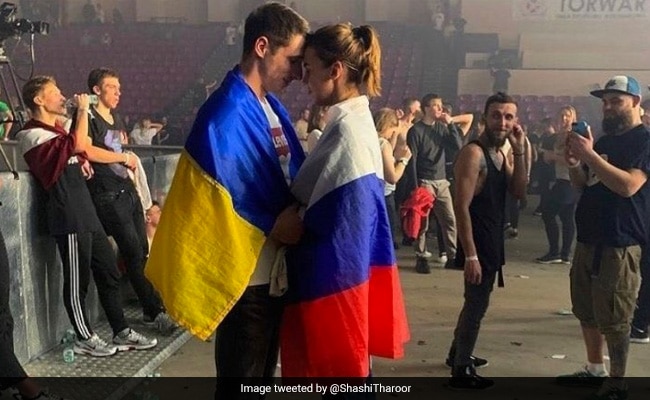 He is draped in the flag of Ukraine. She has the Russian flag wrapped around herself as they share a hug. Against the backdrop of Russia's invasion of Ukraine and the ongoing military conflict between the two countries, this striking image takes on a special significance. It has been going viral online, having been shared by several social media users including Congress MP Shashi Tharoor.

"Poignant: A man draped in the Ukrainian flag embraces a woman wearing the Russian flag," Mr Tharoor wrote while sharing the image on Twitter. "Let us hope love, peace and co-existence triumph over war and conflict," he added.

Several other Twitter users have also shared the image since yesterday, calling for an end to the conflict.

A picture is worth a thousand words!#StopWar#Ukraine#Russia#NATO#Putin#worldwar3#WWIII#RussiaUkraineConflictpic.twitter.com/Ly3W6Xj0Sw

While this picture has seen a resurgence in popularity since Russia launched an invasion against Ukraine on Thursday, the image is actually three years old.

According to the The Washington Post, it was taken when Juliana Kuznetsova (the woman in the photograph) and her fiance were at a concert in Poland in 2019. Tension between the two countries had been brewing even at that time - after Russia invaded Ukraine in 2014.

The image, shared on Instagram, had gone viral in 2019 as well.

"This Is Not Niagara Falls": Stunning Video From Karnataka Goes Viral