He Ordered Lotion, Got Rs 19,000 Headphones Instead. Amazon's Response... 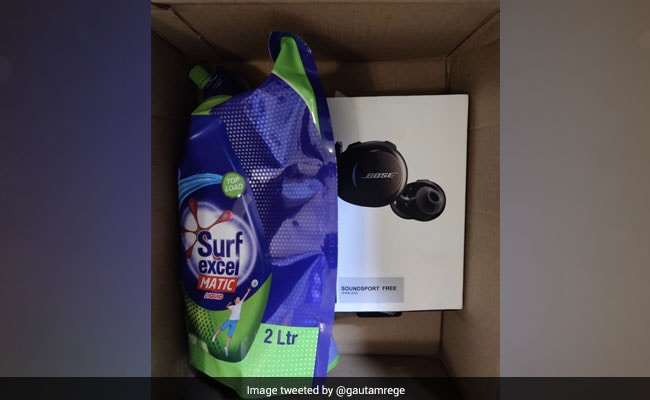 A Twitter user received Bose headphones on placing an order for skin lotion.

A Twitter user recently took to the microblogging platform to relate a bizarre online shopping experience. Gautam Rege, co-founder and director of Josh Software, said that he ordered a skin lotion through Amazon for Rs 300, but received Bose headphones worth nearly Rs 19,000 instead.

What really set Twitter buzzing, however, was Mr Rege's claim that when he contacted Amazon customer care to return the package, he was told to keep the premium headphones as the item is "non-returnable".

"Is the skin lotion still in stock? Please send link," wrote one Twitter user in response to his post. "Hey, I got a skin lotion instead of my Bose earbuds. Let's exchange," another quipped.

Mr Rege took to Twitter on Wednesday to share a photo of the package he received from Amazon, which shows a box of Bose Soundsport Wireless Headphones that retail on the e-commerce platform for Rs 18,900.

His tweet has gone viral with over 6,000 'likes' and more than 1,500 'retweets'. In the comments section, many shared comments envying the Amazon customer's luck, while others shared stories of their own misplaces parcels.

One annoyed Amazon customer said that he had ordered a monitor worth Rs 13,000, but in its place received bottles of Colin.

Guess what, I ordered Dell Monitor worth 13k and what i got is Colin bottles, garbage etc. and now they are saying that they will not refund my money also. Amazon is just trying to fool their customers. Amazon business model revealed!!@AmazonHelppic.twitter.com/mtH1SemrAN

Another remembered the time he ordered aftershave and received a Lenovo tablet,

Congratulations. I had a similar experience as well. The bounty wasn't in the same league as yours though. ???? https://t.co/3DWO8xRdZB

Some also tried to explain why Amazon was willing to give away practically for free a pair of expensive headphones. According to one Twitter user, the loss would be borne by the merchant selling the product on Amazon, and not the e-commerce platform itself.

Yes @amazonIN can ask you to keep it and refund your money also.

Because cost of returning the item (logistics) is on them, cost of items is on the merchant.

Additionally merchant will be charged penalty for having problems with the order. @amazonIN will always make profit.