"The picture is striking ... because it really visualises how the Arctic is changing." 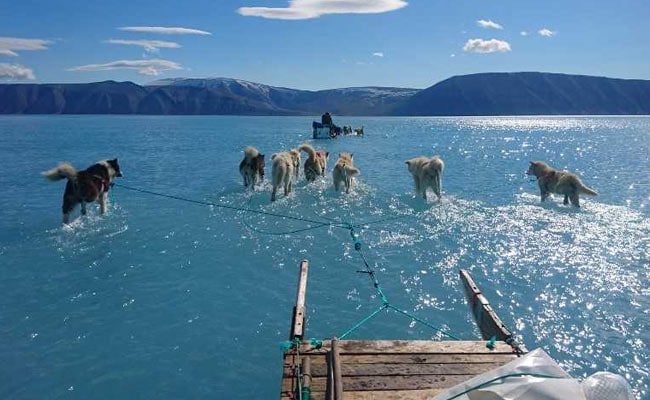 Scientists say 2019 could be another annus horribilis for the Arctic with record temperatures already registered in Greenland -- a giant melting icicle that threatens to submerge the world's coastal areas one day.

"It's possible that we could break the records set in 2012 for both lowest Arctic sea ice extent ... and for record high Greenland ice sheet melt," warned Ruth Mottram, a climatologist at the Danish Meteorological Institute (DMI).

"It is very much dependent on weather conditions this year."

A striking photograph of the early ice melt taken last week by a DMI scientist in northwestern Greenland has gone viral.

While researching oceanographic moorings and a weather station, Steffen Olsen snapped a picture of his sled dogs pushing through a fjord, the sea ice submerged under several centimetres (inches) of meltwater.

Under a bright blue sky, with a snow-free mountain in the background, the dogs appear to be walking on water.

"The picture is striking ... because it really visualises how the Arctic is changing," Mottram told AFP.

Locals who accompanied Olsen's expedition "didn't expect the sea ice to start melting that early. They usually take that route because the ice is very thick, but they had to turn back because the water was deeper and deeper and they couldn't" advance, she said.

On June 12, the day before the photograph was taken, the closest weather station, in Qaanaaq, registered temperatures of 17.3 degrees Celsius (63.1 Fahrenheit), just 0.3 points lower than the record set on June 30, 2012.

"There was a dry winter and then recently (there has been) warm air, clear skies and sun -- all preconditions for an early melting," Mottram explained.

As the atmosphere heats up, the phenomenon is expected to accelerate, changing the way of life for the local population -- who will see shorter hunting seasons on the ice, on which they depend for their survival -- as well as an altered ecosystem.

The number of polar bears in the Arctic has decreased by around 40 percent in the past decade due the shrinking ice, according to the US Geological Survey.

Narwhals -- whales with a large unicorn-like tusk, found in the Arctic -- are seeing their natural ice shelter from their main predator, killer whales, dwindle.

The melting sea ice is one thing. But it is the melting of the ice sheet and glaciers that has a direct impact on rising sea levels worldwide.

Greenland's "Summit Station", located at an altitude of 3,000 metres (9,843 feet), on April 30 recorded the warmest temperature in its history, at minus 1.2 degrees Celsius, according to DMI.

Since early June, 37 billion tonnes of ice have melted, Xavier Fettweis, a climatologist at the University of Liege, wrote on Twitter.

"It becomes more and more likely that a record of mass loss will be broken for the month of June in 2019," he wrote.

Also worrying is how early in the year the ice is melting.

Danish meteorologists announced the ice melting season had begun at the start of May, almost a month earlier than usual.

"The start of the melt season occurs on the first of three consecutive days where more than five percent of the ice sheet has melted at the surface," said scientist Peter Langen on the site polarportal.dk, which collects data from several Danish scientific institutions in the Arctic.

Greenland's ice melt contributes around 0.7 millimetres per year to rising sea levels, an amount that could increase further if the ice melt continues at the current rate.

Since 1972, Greenland's melting glaciers have contributed to a 13.7 millimetre increase in sea levels.

A study published in April in the Proceedings of the National Academy of Sciences (PNAS) showed that Greenland's ice loss since the 1980s has accelerated dramatically since the 2000s, and especially since 2010.

The ice is melting six times faster now than in the 1980s.

And the forecasts are alarming.

In 2014, the UN Intergovernmental Panel on Climate Change (IPCC) predicted in its worst-case scenario that by the end of the 21st century, sea levels would be almost one metre higher than what they were between 1986 and 2005.