The video has received more than 11 million views and 534,000 likes on Twitter. 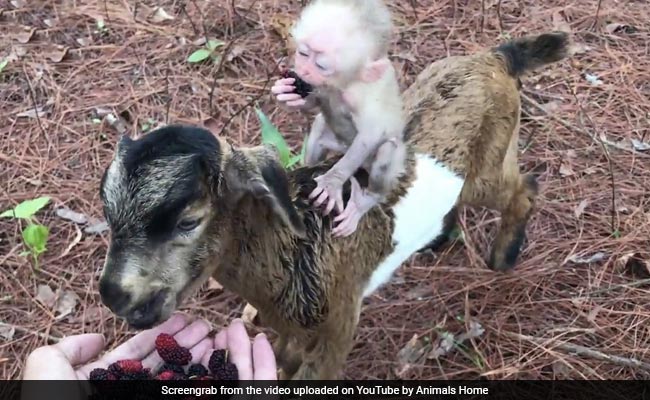 Nothing to see here. Just a monkey and a goat enjoying some berries together.

A video of a monkey and a goat eating berries together is now going viral on the Internet. It shows a person bleating in the woods. Hearing the man's call, a goat emerges from the woods and runs towards him. Surprisingly, a baby monkey is clinging to its neck. As they come closer to the man, he holds out his palm full of berries. The goat, appearing friendly to the man, starts eating them one by one. But the monkey seems a bit confused. A little while later, the monkey too joins in and picks a berry.

After having the first berry, the monkey realises that it may want to have some more and needs to be in a comfortable position. So it climbs on top of the goat and relishes the berries. The video, showing incredible camaraderie between the two little animals, has received more than 12 million views and 534,000 likes on Twitter. It has been retweeted more than 105,000 times.

Am I high right now what is happening pic.twitter.com/itBaV1XUNK

At first, it's difficult to make out what the little thing is tied to a goat's neck swinging left and right as it walks towards the man. And it can freak out viewers.

At first was like "There is nothing wrong with that vid, just a good boi eating some berries" but then I did a double take

One user commented on the post that she thought it was some kind of a computer-generated “demon”.

Another wondered whether the little money was driving the little goat. To that question, a user said he “can't say who had what intent” but adventure, some playing, and a snack was on the agenda.

Some people found the video cute.

Omg! Bebe goat with bebe monkey?! My head may explode from the awesome cuteness! ????

Thanking the person who shared the video, a person said it was the most adorable thing they had seen in life.

That is by far the most adorable thing I've ever seen in my life. Thank you.

The video was first shared on the YouTube channel 'Animals Home', which follows the adventures of a monkey named Bibi.