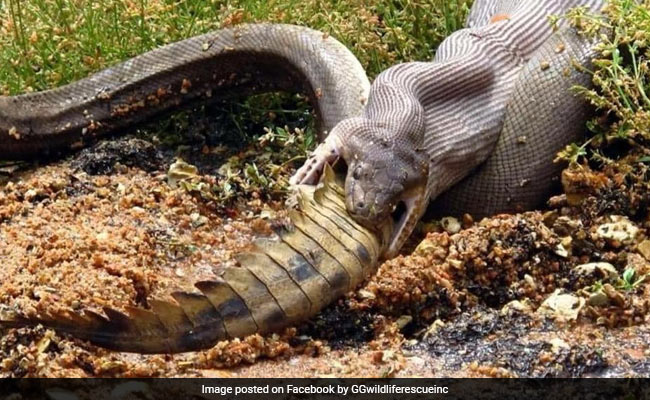 Images of a python swallowing a crocodile whole have gone viral online.

Grisly pictures shared online show an olive python swallowing an Australian freshwater crocodile whole. The pictures were clicked by a kayaker in Mount Isa, Queensland, and shared online by GG Wildlife Rescue, a nonprofit in Australia.

According to Live Science, pythons are known for their dietary ambitions - they mouths can stretch open extremely wide because of its separated lower jaw. They have been known to eat animals larger than themselves, including deer, alligators, crocs and - on certain occasions - even humans.

The olive python, which is native to Australia, can grow up to 13 feet in length.

Pics of the olive python swallowing the crocodile have gone massively viral online, and collected thousands of comments.

"Amazing pictures! I thought the croc would have won," wrote one person in the comments section. "Incredible!! I will not be taking my kayak to Mt Isa!" another added.

In 2017, an Indonesian man was found dead inside the belly of a giant 23-foot python.