Why thousands of Instagram users are wearing pillows as dresses. 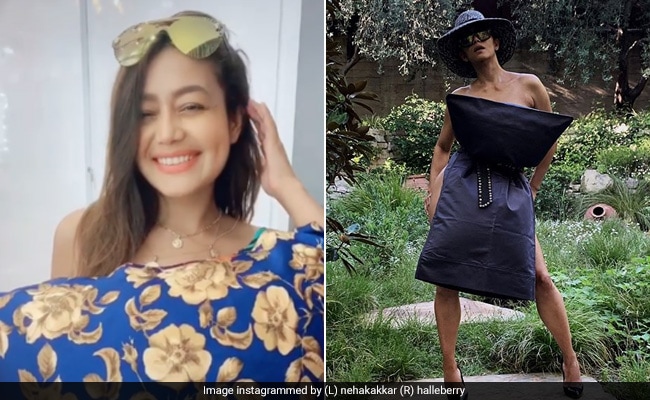 Neha Kakkar, Halle Berry are among those who participated in Pillow Challenge.

What do Neha Kakkar and Halle Berry have in common? They're both acing this viral social media trend - and they are not alone in doing so. A number of celebrities, influencers, TikTok and Instagram users are beating quarantine blues by glamming up in bedding for the viral #PillowChallenge or #QuarantinePillowChallenge.

The strange trend started at the beginning of the month when thousands of Instagram users began to share photos of themselves dressed in pillows secured with belts and ribbons to look like glamorous, puffy dresses. The trend of turning pillows and cushions into minidresses has now reached celebrities too - with Oscar winning actress Halle Berry being among the first to take on the #PillowChallenge.

Last week, the Monster's Ball actress took to Instagram to share a photo that shows her wearing a pillow like you've never seen it before. Halle Berry paired her black pillow with matching heels, sunglasses and a sequinned belt to complete the look.

Take a look at her entry to the Pillow Challenge below:

You already KNOW you couldn't keep me from the #PillowChallenge ????

Closer home, singer Neha Kakkar also transformed not one, but three pillows into dresses for the challenge. Her entry to the #PillowChallenge has been viewed a whopping 5 million times on Instagram.

Meanwhile, actress Anne Hathaway channeled her inner Mia Thermopolis by dressing up as the character she played in Princess Diaries for the challenge. "A Queen is never late; everyone else is simply early," she wrote while sharing a picture that shows her dressed in blue and white pillows with butterfly wings and combat boots.

“A Queen is never late; everyone else is simply early.” ???? #pillowchallenge

The actress' spin on the viral trend has been widely appreciated, collecting over 2 million 'likes' since being shared yesterday.

You can take a look at some other entries to the #QuarantinePillowChallenge here.

What do you think of this trend? Let us know using the comments section.