Four Cats Fight A Snake In This Shocking Video

Wildlife officials were called to rescue the snake 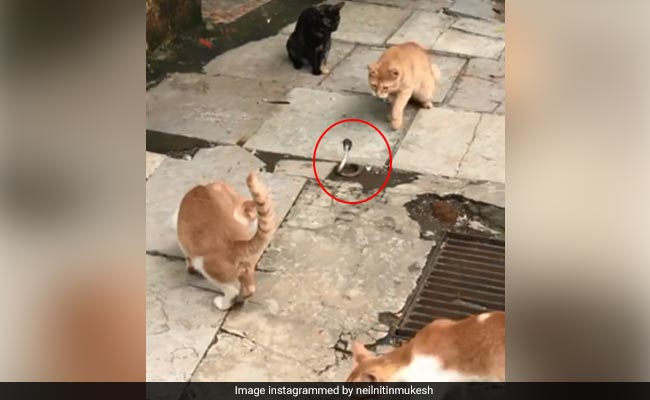 Actor Neil Nitin Mukesh on Sunday took to Instagram to share a video that shows four cats surrounding a snake - which many in the comments section identified as a venomous cobra. In the shocking video, the cats eye the reptile curiously, with one even going so far as to take a swipe at it. According to Neil Niting Mukesh, the unusual video was captured when he arrived for the shoot of his upcoming film, 'Bypass Road'.

In the video, the snake prepares to strike back after the cat-attack as curious onlookers, Neil among them, record videos. Thankfully, in the end, it decides against fighting further and slithers into surrounding greenery.

"Earlier in the day. Went for the BGM with @naman.n.mukesh for #BypassRoad , got down of the car and saw this," wrote Neil while sharing the video on Instagram.

Earlier in the day. Went for the BGM with @naman.n.mukesh for #BypassRoad , got down of the car and saw this.

The video has been viewed over 77,000 times on Instagram.

Neil Nitin Mukesh confirmed in the comments section that wildlife official were called to rescue the snake.

"Someone should have informed the snake catchers to get that young cobra out of there and release it in forest area around," wrote one person in the comments section. "Did that," responded Neil, adding a thumbs-up emoji.

Others commented on the cats vs snake video. "Poor little snake got very scared," said one person. "Was catching my breath, thought it was gonna hurt one of the kitties," said another.
'Bypass Road, which began filming last year, is being directed by Neil's brother, Naman Nitin Mukesh. It has reportedly been shot in Alibaug and Lonavla and will release later this year.