A video of a snake rescue shows forest guard Anil Kumar telling people about the importance of wildlife in the ecosystem. 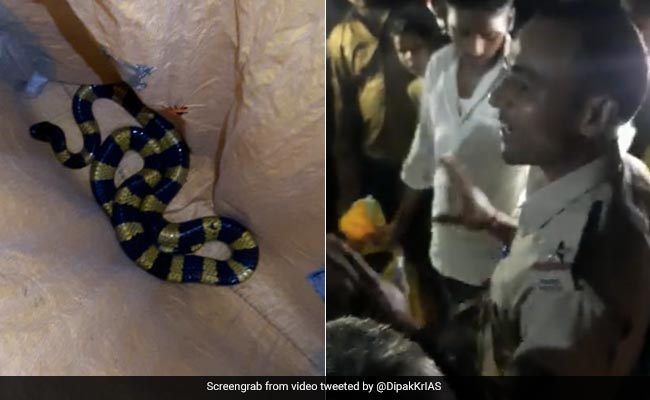 A banded krait was successfully rescued in Bihar.

A forest guard in Bihar is being hailed as a hero for rescuing a highly venomous snake from a village in the Terai region of Kishanganj district and raising awareness among the villagers about peaceful co-existence with wildlife. Forest guard Anil Kumar rescued a banded krait from Pharingola village and thanked the villagers for calling the officials and not killing the reptile. He also delivered a speech on how humans should share space with other organisms and not feel threatened by them. His impromptu speech was captured on camera and is now going viral on social media.

The video has been shared by Dipak Kumar Singh, principal secretary in Bihar's Department of Environment Forest and Climate Change. It has got around 6,800 views so far on Twitter. The video shows Mr Kumar surrounded by villagers at night and another person holding a bag containing the snake.

“Those who informed the forest department about this snake did a great job. It (the snake) is also a being and we don't need to fear them. We just need to be a little alert. Snakes, too, are a part of nature. Without them, our planet is incomplete. God has created a defined role for all lives. Some people kill snakes, but I'm happy you have called us. This snake will be released into its habitat. My request to all of you is please do not kill snakes, inform us always,” he added.

…among people about the importance of wildlife in the ecosystem.2/2#SaveWildlifepic.twitter.com/W6NKIqwyRX

A number of people appreciated the forest department for rescuing the snake and also Mr Kumar's speech. “He is speaking with clear mind and confidence. It also shows that he accepted by the villagers as one of their own,” said a Twitter user.

He is speaking with clear mind and confidence. It also shows that he accepted by the villagers as one of their own

Another hailed the forest department for their effort in rescuing the snake.

When a user said people in his village killed snakes, the principal secretary asked him to inform the local forest officials or contact him directly.

Please tell them to inform forest officials. In case they are not able to connect, they can always inform me or WhatsApp on my no 9471002767

Another user suggested the top officer should speak with the forest guard and the officer said he would.

What do you think of the forest guard's speech? Impressive? Next time you spot a stray snake, keep a safe distance. Just keep monitoring the reptile so that you know where it is, and inform the relevant authorities immediately.